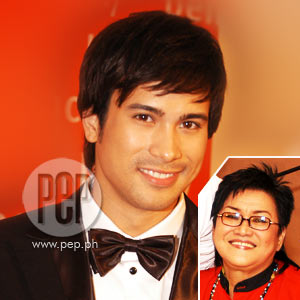 When asked to confirm whether he would file a case against Lolit Solis (inset) tomorrow, Sam Milby seemed clueless.

Sam Milby was immediately approached by the entertainment press when he arrived at the "Hitch Party" of Head and Shoulders last night, November 14, at Fiamma Bar in Makati City.

Some of the reporters asked if he is going to file a case against entertainment columnist Lolit Solis tomorrow, November 16. The young actor-singer seemed surprised about the date, "I don't know, they announced that ba?"

He was then asked what case he is planning to file against Lolit. "I guess it would be [libel]. I'm not sure," answered Sam, who obviously wanted to avoid the issue.

He added, "Actually, about this subject, I'm still talking to the lawyers, and they asked me not to really say anything about it."

Since he did not want to talk about the case, the press asked him instead if he has forgiven Lolit, who has already apologized in StarTalk.

PEP (Philippine Entertainment Portal) then asked him if he would forgive Lolit if she approached him personally. The young actor did not answer. Instead, he looked around for his road manager to ask if he was allowed to answer questions about Lolit and the planned case against her.

Sam made the phone call. Following this, the road manager told the reporters that Sam was not allowed to talk about the issue.