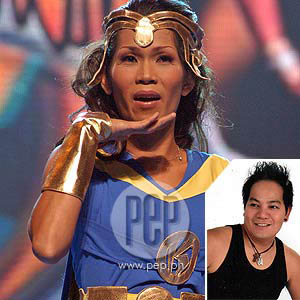 
News about Pokwang's alleged one-night stand with ex-singer Rozzano Martin circulated the tabloids nearly four months ago. Pokwang claimed that they had met at a stopover in the Netherlands while shooting Crazy Over You.

At first, the comedienne just tried to laugh off the issue but began to realize the gravity of it by the reaction of her loved ones. This drove her to deny that she had ever met Rozzano.

The message seemed to have reached Rozzano's ears as he phone patched a reply to Pokwang's message with an apology.

All of this happened over four months ago, and now, Pokwang and Rozzano got to patch things up personally as Rozanno came back to the Philippines last October 29 to produce an album and concert.

Pokwang admitted in her interview with Entertainment Live yesterday, November 17, that the issue is still fresh in her memory. With tears in her eyes, she introduced herself as Marietta Subong, not as Pokwang, her screen name .

That said, Entertainment Live co-host Toni Gonzaga suddenly called in Rozzano to do his part in finally sealing this issue shut. After he greeted Toni and Pokwang with beso-beso, Toni asked Rozzano if he was also affected by the issue.

The big question here, Toni said, is why Pokwang was involved in this controversy in the first place? Did a one-night stand really happen between the two of them?

"Wala," Rozzano said. Then he offered a likely theory on what may have caused it: the press.

From then on, Rozzano began on what was like an attempt to jog the memories of both Pokwang and Toni on remembering who he was and how they all met. Pokwang looked far from convinced.

The last sentence was meant to be as a joke just to loosen the mood. After the laughs, Rozzano again said his apologies and Pokwang was now able to breathe freely, knowing that this issue is finally off her chest.