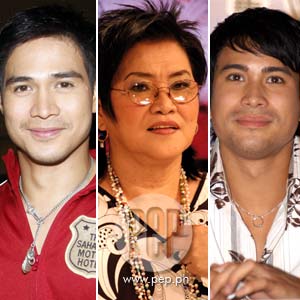 “With regard to that alleged video, I can only say, we’re not calling your bluff. Not at all. We have details of every area by the hour with companions who were with Piolo and Sam that day. That thing that she says she has no evidence against Sam? That makes the whole story more inconsistent because if you say that you saw the two of them together in this kind of demeanor, then bakit walang video kay Sam?” Atty. Joji Alonso said about Lolit Solis’s c

In a live interview with the The Buzz yesterday, November 18, Atty. Alonso pointed out a couple of things, mainly in response to Lolit's comments on StarTalk a day before, November 17. First is Lolit's belief that the two matinee idols would pursue the case even if she would apologize or retract her story, knowing that Piolo and Sam are asking for a damage of twelve million pesos.

"Precisely the point is," Atty. Alonso began, "we wrote a demand letter to her, requesting na i-retract niya ang kanyang statement, appealing to her sense of decency to make an apology because the entire story was a false one. We [would] have never filed the lawsuit if she apologized. Yung pagka-present, she allegedly made an apology, but it was not an apology because it was termed in the context of: ‘Kung nasaktan ko man kayo, I am sorry, but hindi ko babawiin sinabi ko dahil nakita ko kayo.'"

MANILA, MANILA. Aside from the damage issue, Lolit also claimed that the other party wanted to convict her in Manila because Piolo's friend, Yul Servo, is a councilor there and that she knew Lolit was convicted there for the Manila Filmfest scam in 1994. As we all know, it would mean jail for Lolit if she would again be convicted in Manila.

The lady lawyer replied, "Actually, that's another issue that we can raise against her. We have nothing to do with Yul Servo. His name is totally immaterial to this case.

"Bakit Manila?" Joji continued. "Because there are choices kung saan puwede isampa ang kaso—puwedeng residence, puwedeng sa place of publication or where the newspaper was first released. This was in Manila. Now we were considering filing the case in their place of residence, pero mahahati ang kaso because Piolo lives in Quezon City while Sam is living in Eastwood. Kaya lang, ginagawa ang bahay niya ngayon kaya nagre-rent siya ng place sa Makati."

PUBLIC FIGURES. Another point Lolit wanted to make is that Piolo and Sam are public figures. There were a lot of writers before who gave speculations about Piolo and Sam's sexuality, why sue only her?

"We are talking about two human beings who have tried their best to take whatever they get," Atty. Alonso explained. "Kumbaga, tinitira na sila, sige lang. Magpakumbaba lang, huwag magsalita. But at any point at a person's life, there is such a thing as a saturation point. Bumigay. Yung punto na sinabi na ‘Tama na, sobra na. This has got to stop, this has got to end.' This is not a gay issue. This is an issue on whether or not there was libel committed."

The lawyer then shared her thoughts about her clients: "What's really sad is parang lumalabas si Sam and Piolo ang masama for protecting their rights. Let's not forget na si Piolo and Sam are the victims here. Sila yung pinagtatawanan, sila yung pinagsasabihan na ‘Ay, bakit natin susuportahan ang mga ganito sa pelikula, mga bakla naman ‘yan, they're not saleable as leading men.' You have two young men who are good friends and they cannot even be seen together in public because of the kind of suspicion people get."

A WAY OUT. Is there any chance that Lolit might get out of this mess?

"It will depend on the content of retraction," offered Atty. Alonso. "For as long as she says that with definitiveness that she didn't see Sam and Piolo in Sofitel, and that the whole story was fabricated, and that's she's sorry for what she's done."

What are Piolo and Sam feeling now that they are embroiled in this kind of situation, lawsuit and all?

"They are broken people," she sadly answered. "Umabot sa punto na hindi na siya nakakatuwa, hindi na siya something that you just pass. Hindi ganoon, e, masakit na. It has really damaged their reputation. Sam is such a good person, as well as Piolo. You wouldn't even imagine them harming other people. Enough is enough."

On a positive note, Joji also said: "I think it has made them stronger persons that they have finally found a chance to really fight for their names, reputation, integrity, and family."