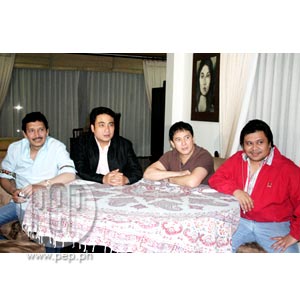 Four of Philippine cinema's biggest action stars—Rudy Fernandez, Bong Revilla, Jinggoy Estrada, and Philip Salvador—sat for a special dinner hosted by Rudy and wife Lorna Tolentino at their White Plains residence. The special dinner was covered by StarTalk with Lorna interviewing the four action stars, as part of the show's 12th anniversary presentation.

The evening was full of laughter and ribbing by the four longtime friends even if cameras were rolling to record their conversation. Surprisingly, Lorna remained composed even though the men were teasing each other and bantering playfully all throughout the 30-minute interview.

The two senators, Bong and Jinggoy, sat beside each other on one side of the table while Rudy and Philip were seated on the other side. Lorna sat at the head of the table. Lolit Solis, Lorna's StarTalk co-host, was also present.

It was the ultimate guy talk! Every time one was thrown an intriguing question, there was no way he could evade it.

Bong, for instance, was asked about his son Luigi, not by Lani Mercado. Luigi was shown on a StarTalk segment a couple of weeks ago, how did his wife Lani and their kids react to it?

"Importante yung tibay ng relasyon at tiwala sa bawat isa. No one. Nobody can destroy my family. I love my kids. I love my wife," Bong said about his big family.

On his turn, Philip talked about meeting up with his and Kris Aquino's son Joshua.

Jinggoy's question was about his father, ex-president Joseph Estrada, who was recently pardoned, and about the ongoing procedure to seize Erap's properties and assets.

For her part, Lorna admitted that she felt uneasy while interviewing her husband Rudy about his ongoing cancer treatment. "Ang hirap tanungin kapag asawa mo ang tatanungin mo," she said.

The four men had a good exchange about keeping secrets within the group.

Lorna asked Bong about the possible revelations he was going to say in YES! magazine this December.

A brief pause. And then laughter from everyone.

To which Rudy said, "kaming apat lang ang may alam."

Again, the four best friends broke out in laughter and chuckles.

Laughter once again. This time, Phillip points at Bong.

"Ba't ako ang—" Bong still laughing with the others.

The four action stars hardly ate anything, though the table was laden with food. It was in sharing each other's merry company that filled them with a bellyful of laughter.