Bong Revilla and Lani Mercado reveal their marital highs and lows in "YES!" 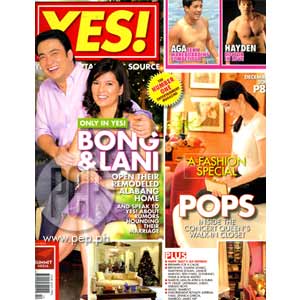 It endured the test of time, alright, but it wasn't all a bed of roses. "If other couples have problems with gambling, drugs, alcoholism, may problem din kami..." confided Lani Mercado to YES! about her marriage with action star Bong Revilla.

Staying married for 21 years is no easy feat for any couple. Harder still if the couple in question are Bong Revilla and Lani Mercado.

"It's quite difficult especially if the ladies are the ones pushing themselves to you already," Lani confessed in YES! magazine's December 2007 issue. Taking a stab at her husband's "playboy" image, the morena actress added, "And there are quite a few in the [entertainment] industry who are like that."

During the course of the three-hour interview by YES! Editor-in-Chief Jo-Ann Q. Maglipon, the celebrated yet always controversial couple never made any attempt to sugarcoat reality just to play up to the public's idea of a fairy-tale union. Neither was there an attempt to cover up Bong's legendary weakness: women.

Silence. The same quality displayed by Lani on numerous occasions, triggering critics to label her as "martir" or "walang pakialam" in the face of Bong's alleged wrongdoings.

As her nature dictates, Lani will fight for her man but she won't allow herself to be pushed around either. In fact, there were even times, as Bong revealed, when Lani threatened to storm out of the marriage because she had enough.

Jo-Ann said that the couple was in good spirits and quite open in answering sensitive questions raised during the interview.

But the conversation was not devoid of tension. When the topic came up of Bong having a child by another woman and the pain Lani had to go through upon learning about it, the actress reportedly sobbed before hastily reaching out for a table napkin.

"Quickly dabbing the table napkin to her eyes, she says, ‘Excuse me,'" wrote Jo-Ann. "We are all rendered silent, including Bong."

To read the full article, grab a copy of YES! magazine's December 2007 issue, now available in all leading bookstores and magazine stands nationwide.