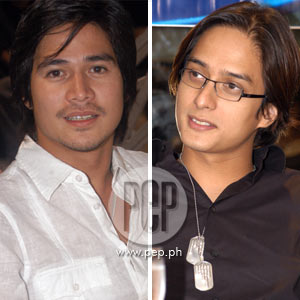 The death of Maja Salvador's father paved the way for Piolo Pascual and Ryan Agoncillo to finally resolve their differences.

According to reports, the two feuding actors talked last Monday, November 19, during the wake of former actor Ross Rival at the St. Peter Chapels, Quezon Avenue in Quezon City. Ryan's manager, Noel Ferrer, revealed that it was Maja's handler, Chit Ramos, who initiated the reconciliation.

Prior to the incident, sources said that Piolo arrived with Erik Santos and Mark Bautista while Ryan was accompanied by girlfriend Judy Ann Santos. Chit, however, refused to say anything when asked by reporters how she managed to convince Ryan and Piolo to settle their differences.


Judy Ann, on the other hand, said that she never heard the conversation, but she was very happy that everything turned out fine between Piolo and Ryan.

A LOOK BACK. The feud between the two male stars started last year when rumors started circulating that Judy Ann—supposedly owing to Ryan's jealous streak—personally requested to Star Cinema to edit out her steamy kissing scenes with screen partner Piolo in the movie Don't Give Up On (2006).

The already volatile situation was aggravated when Piolo made a comment on Juday and Ryan's relationship.

Irked by what seemed Piolo's meddling, Ryan lashed out by sending an open letter to the press in which he indicated: "1.) Walang tunay na lalake ang magsasalita o makikialam sa relasyon ng iba. 2.) Whatever happens between me and Juday is between us, and we are OK. And for Piolo to talk about my girlfriend outside work is rather ungentlemanly. 3.) I learned that in a recent The Buzz interview with Piolo & Juday, Juday was caught by the camera saying "Echosero" referring to Piolo—after she repeatedly brushed off Piolo's advances as soon as the camera lights went on. I just have this today. Next time I see him, I'll put him in his place."

Months dragged on and the feud hung fire.

Both parties had repeatedly told the press that a ceasefire was possible but they didn't want to force it or do it in public.

A couple of months back, Piolo had the chance to settle the issue but backed off instead.