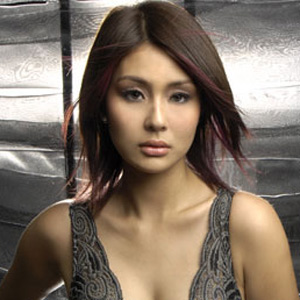 "Mas lalo akong na-tense dahil international siya," Iwa Moto said about her pictorial for FHM Singapore. Above, she is photographed for the December 2006 issue of FHM Philippines.


StarStruck Batch 3 first runner-up Iwa Moto recently had another sexy pictorial. This time her photos will be seen on FHM Singapore, making Iwa the first Filipina to be featured in this particular edition.


In a StarTalk exclusive this afternoon, November 24, Iwa related that she was a bit nervous about doing another sexy pictorial after gracing the cover of the December 2006 issue of FHM Philippines.

Photographer Jay Tablante told the hosts of the talk show, "I've shot Iwa for a couple of ad work na. So, when I went to Singapore and showed my portfolio to them, coincidentally, they had a copy of FHM Philippines December [2006] in which Iwa was the cover. So, we were thinking around who's a possible model to shoot."


David arrived in the country last November 16 and the photo shoot was held last November 19, with Jay as the photographer. The Editor-in-Chief of FHM Singapore left last November 20 to work on the 8-page layout containing Iwa's photos.


The pictorial was held at a house in Katipunan Avenue, Old Balara, Quezon City, where Iwa was tasked to wear two-piece swimsuits and lingerie with stylish designs. It is reported that FHM Singapore edition will not be released in the Philippines.


But fans of the StarStruck alumna need not panic since Iwa will soon be seen as the new calendar girl of a liquor company. She did the sexy pictorial more than a month after her appendectomy operation.

Iwa doesn't feel bothered at all at being pitted against other StarStruck graduates who are going the sexy route such as Cristine Reyes and the country's current sexiest woman, Katrina Halili.