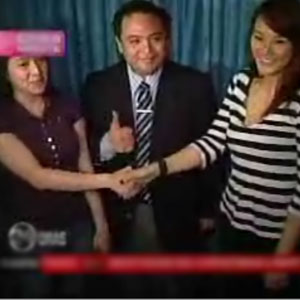 Carlene Aguilar's interview on The Buzz last November 18 seemed to turn the tide of the word war between her and Cristine Reyes. They decided to peacefully talk things over and mutually end an issue that obviously stressed both of them.

The November 18 interview featured a calm and objective Carlene as she explained her side to the story. Cristine and her lawyer, Atty. Dexter Lacuanan, happened to be watching the show on that day; they discussed it over the phone and Cristine decided to meet up with Carlene to settle the issue amicably. Atty. Lacuanan then called up Cristy Fermin so that he could talk to Carlene, who was still in the studio at that time.

In a separate interview with Atty. Lacuanan, he said, "I saw her [Carlene's] sincerity, I saw her pain. So what I did was, I initially called my client [Cristine] and also asked for her reaction. She felt Carlene's pain and she likewise understands where Carlene is coming from. I called up Cristy Fermin and asked for help to contact Carlene."

When news reached Carlene, she didn't think twice about a settlement, although she felt unsure if she was ready for the meeting.

Carlene and Cristine met up at the Rembrandt Hotel in Quezon City last November 23. Both women cried as they hugged and shook hands after sharing an intimate conversation. The tension felt by both parties before the meeting was finally shattered and the atmosphere became harmonious.

An equally relieved Atty. Lacuanan announced: "We would like to announce that both parties have already come to an agreement. We have decided that it was all a big misunderstanding. Part of the agreement was [that] both parties will no longer make any statements against each other.

"So on Monday [November 26], I would be filing, or on the next few days, file the appropriate documents to withdraw the case of slander and oral defamation which we filed against Carlene."

How is Carlene after the storm?

What did Atty. Lacuana tell her that made her agree to the attorney's request for a meeting with Cristine?