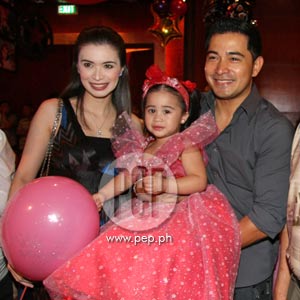 Proud parents Sunshine Cruz and Cesar Montano made sure to give their bunso, Angel Francesca, the best birthday celebration. "I wish she'll be a God- fearing person," smiled Cesar to PEP while gazing at Chesca from a distance.
Food, fun, games and celebrities flowed non-stop yesterday, December 1, at the Hyatt Hotel and Casino in Manila during the 2nd birthday celebration of Sunshine Cruz and Cesar Montano's daughter, Angel Francesca.

The glitzy "Princess Hollywood" theme played perfectly in synch with the occasion as the entire Le Salon ballroom was decked with popular Disney female lead characters sprinkled with touches of silver-screen glamor.

PRINCESS CHESCA. It was Sunshine who chose the overall concept. "Gustong-gusto nila mga princesses and I wanted this talaga to be very special since it's also a dedication and second birthday so medyo binonggahan na namin," shared Sunshine to PEP (Philippine Entertainment Portal) during the early goings of the party.

Cesar also had his share in the entire preparation. "Hands on ako," Cesar proudly said. "Well, aside sa mga ginagawa ni Sunshine, I also have to do my own errands."

As for the theme, the dusky actor never had any qualms and willingly went along with the ideas of Sunshine and the party organizer.

The two-year old Chesca never threw any tantrums throughout the celebration and was happily basking in all the attention showered on her. Sunshine revealed that Chesca, despite her very tender age, has always been comfortable in social gatherings, a trait she inherited from her dad.

STAR STUDDED. Celebrity guests came in torrents as the party went along. Some of the celebrities spotted by PEP were comedienne Giselle Sanchez with her four-year-old daughter Lia, Ruffa Gutierrez along with kids Lorin and Venice, Annabelle Rama, Richard Gutierrez, former Ilocos Sur governor Luis "Chavit" Singson, Marjorie Barretto, Assunta de Rossi, Ana Roces and Robin Padilla, among many others.

Manila Mayor Alfredo Lim also dropped by for a quick visit. Interestingly, a few seconds after his departure, Manny Pacquiao arrived with his entourage. It is of course common knowledge that Manny and Mayor Lim had an issue regarding the boxing icon's alleged snub of the victory parade prepared exclusively for him following his recent victory against Mexican fighter Marco Antonio Barrera.

Sunshine giddily disclosed that she pestered all of their friends just to make sure that everyone would make it to the party.