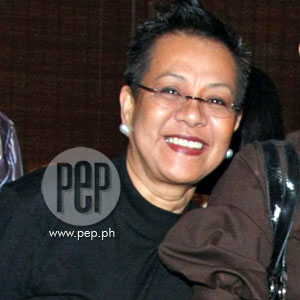 After her arrest in Makati last Thursday, November 29, actress-scriptwriter Bibeth Orteza was released on December 1 for humanitarian reasons.

A few hours after she was released by the authorities for her participation in the Manila Peninsula standoff that occurred last Thursday, November 29, PEP (Philippine Entertainment Portal) spotted actress-scriptwriter Bibeth Orteza-Siguion Reyna at the 57th birthday of talent-manager Dolor Gueverra at the Milky Way restaurant in Pasay Road, Makati City.

Bibeth was one of those who were accosted by the police together with alleged mastermind Senator Antonio Trillanes IV, army officers, civilians, and some members of the media who were covering the siege inside the hotel.

Senator Trillanes and his Magdalo group of soldiers are staunch critics of President Gloria Macapagal-Arroyo. They accuse her administration as being oppressive and corrupt.

Bibeth, who is known for her liberal views, courageously stood beside Trillanes and Brig. Gen. Danilo Lim, unmindful of the tank that was bulldozing the façade of the Manila Peninsula and tear gas rising through the hallways.

"We were doing something we believed was right," Bibeth firmly told ABS-CBN reporter Ces Drilon when asked why she stayed despite the imminent danger.

When the smoke cleared, all those who were deemed supporters of Trillanes were arrested by the authorities and escorted to a waiting bus. Bibeth was reportedly hustled into the bus carrying the Magdalo soldiers.

Those in the know revealed that Bibeth's famous wit and sense of humor kept spirits up while inside the bus. Looking at the soldiers around her, Bibeth made fun of the gloomy situation.

She quipped, sending everyone inside the bus in stitches:

Bibieth is celebrating her birthday on December 11. She is married to director Carlitos Siguion-Reyna.

Bibeth was released from maximum security of the Philippine National Police Custodial Center only at dawn last Satuday and turned over to her immediate family. According to the official statement furnished by the authorities, her release was done on "humanitarian grounds."

During Tita Dolor's birthday party last Saturday evening, Bibeth showed no signs that she was shaken by her arrest and detention. She shared a table with key opposition figures Senator Chiz Escudero and Makati Mayor Jejomar Binay, along with her mother-in-law, Armida Siguion-Reyna.

PEP tried to get Bibeth's side of the story but she politely begged off through text, saying that she was advised by her lawyer not to say anything about the incident while the investigation is ongoing.