Pops Fernandez reminisces 25 years of her career in "Divalicious" concert 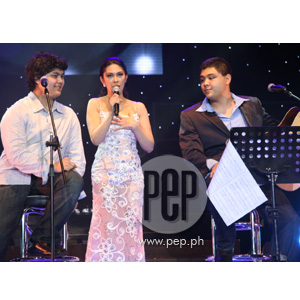 Pops Fernandez says about her sons with ex-husband Martin Nievera: "Now, my life is complete because I have Robin and Ram. They're my heroes, my greatest gifts." The Concert Queen rendered Jim Brickman's "The Gift" with Robin playing the guitar, and Ram singing the male vocals—a totally moving number by a mom and her sons. Indeed, they were a gift, three times over, to the rapt audience last Saturday, December 8!

The Concert Queen's loyal fans from the U.S., Middle East, Metro Manila and nearby provinces trooped to the Big Dome to celebrate their idols' silver anniversary. Over 34 songs—1980's retro pieces, R & B numbers, hits of Madonna, Motown, Bacharach—comprised the repertoire of Pops.

She also performed the acoustic version of her own singles, "Just Say You Love Me," "Don't Say Goodbye," and "Kaya Pala."

The Concert Queen shared the stage with Megastar Sharon Cuneta, and then with Mr. Pure Energy Gary Valenciano, for the first time ever.

Sharon and Pops, who were both discovered by Tito Sotto, sang "Say A Little Prayer," "I'll Never Fall in Love," "Make It Easy On Yourself," and "That's What friends Are For," while making adlibs about their heartaches and friendship. The medley number was both touching and entertaining.

Pops also gave the audience a glimpse of her highly successful concert series in the U.S. with Kuh Ledesma this year. The two rendered a Motown medley.

To show her versatility, the Concert Queen shared the stage with Jay-R and Kris Lawrence. The three wards of talent manager Arnold Vegafria delighted the younger crowd by singing Sean Kingston's and Jojo's versions of "Beautiful Girls."

Of course, the Concert Queen's 25 years in showbiz will not be complete without mentioning the name of her ex-husband and Concert King, Martin Nievera. The latter had a show at the SM Mall of Asia that same night.

The portion she dubbed as "Duets No More" featured all-time duet favorites— "Almost Paradise, Tonight I Celebrate My Love For You," "With You, I'm Born Again," and "Maybe"—which she and Martin sang during their Penthouse Live! days. Pops exclaimed, "Kaya naman pala, e, [kantahin mag-isa]."

As expected, the concert of Maria Cielito Lucban Fernandez, Pops's real name in showbiz, was star-studded. The Barretto sisters were there. The Gomez family also came. Ruffa Gutierrez, Vina Morales, and Dawn Zulueta were spotted. Mother Lily Monteverde and daughter Roselle were also present. And Pops's boyfriend Jomari Yllana was seated right in the middle of the front row.

There were also cry moments for the Concert Queen. Though she described her concert as a "party," she couldn't prevent her tears from falling when she sang "Dito," a song she dedicated to her dad, the late Eddie Fernandez; when she performed Jim Brickman's "The Gift" with her "heroes" Ram and Robin; and when she rendered Karen Carpenter's "A Song For You," which she dedicated to the fans and the people she worked with," and Grace Jones's "What I Did for Love," which she sang for her mom Dulce Lukban.

For the encore, she had an upbeat number of songs from the ‘80s to the present. This time, even the passive crowd in the patrons' area danced with her.

All throughout, Pops was bursting with energy, in top form, and undoubtedly, is still the reigning Concert Queen. The show started late, but it was definitely worth the one-hour wait.