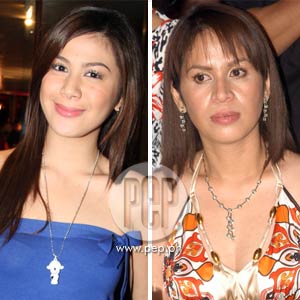 The threatening text message reportedly received by young actress Valerie Concepcion last December 3 was nothing but a prank. This was according to Manny Pacquaio's good friend, Reli de Leon.

Stunned but composed, Valerie decided not to retaliate until she was certain that the message indeed came from Jinky.

Valerie's manager Becky Aguila assured Mrs. Pacquiao that her ward was simply doing her job and the prospect of entering into a relationship with the boxing icon is absurd.

"I assure her na hindi gagawin ni Val na sirain ang pamilya nila. Kilala ko ‘yung bata. She may had her mistakes when she was young but she has learned her lesson. Besides, Val is not the kind who gets involved with a married man," explained Becky.

According to Vinia Vivar in her Pang Masa column today, she got a call yesterday from Reli who was personally tapped by the Pacquiao's to clear the issue on their behalf.

"Nakausap ko si Jinky," said Reli, "at idini-deny niya na nag-text siya kay Valerie. Sabi niya, she can't do that. Jinky is an educated person and she won't go down to that level. Even at the height of [the] Ara Mina thing, hindi niya ‘yan ginawa."

Spokesperson Reli de Leon also talked with Becky and asked for the number of the prankster, citing similar incidents in the past.