Edu Manzano to Bong Revilla: "How can I forgive you?" 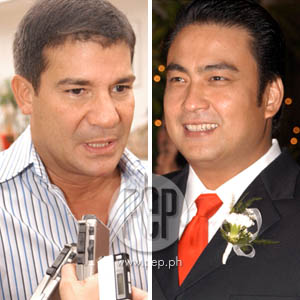 These were just some of the words that made Optical Media Board (OMB) chairman Edu Manzano clearly disappointed with Senator Ramon "Bong" Revilla. As Edu said, he was disappointed that Bong made negative comments about his duties and responsibilities, as if Bong himself had done anything significant when he was still the OMB chairman.

Bong was the Video Regulatory Board (VRB) chairman until Edu replaced him as Optical Media Board (OMB) chairman. Since the issue was all about duty and responsibility, Edu pointed out that doing media coverage on raids wasn't part of any operation.

WHAT "MOLE" ? Edu has gotten word about Bong's theory regarding a mole inside the OMB office who tipped off pirated DVD/VCD merchants in exchange for cash.

COUNTER-CRITICISM. Bong also told the media that Edu was "below average" in terms of doing his job. Edu, on the other hand, was puzzled with Bong's judgment.

NO PEACE PIPE. A lot of people have questioned Bong's involvement with this issue. Does Edu believe that Bong did these this as publicity for his upcoming film Resiklo?

Is he ready to forgive Bong for everything?

"Hindi ako magiging ipokrito, hindi ko kaya," admitted Edu. "At this point in time, not only have you hurt me, you hurt my family. How can I forgive you? I have children, and they have classmates. Hindi porke't sorry, e, okay na.