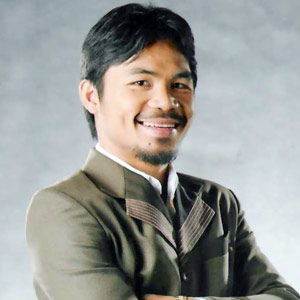 Manny was referring to the issue that Anak ng Kumander co-star Valerie Concepcion reportedly cried over the torrid kissing scene, which director Kaka Balagtas had instructed during their shooting.

According to Valerie, she went into the set knowing fully well that the scene would only require a mild kiss. She was wrong.

ALL PART OF THE JOB. On his end, Manny explained that he was completely oblivious about the agreement between Valerie's manager Becky Aguila and the director. Perhaps, as a nod to Valerie's professionalism, the famous son of General Santos City mentioned that he sensed nothing wrong with his female co-star during the take.

He also defended his wife against the accusation that she sent a scathing text message to Valerie, berating and threatening the young actress to stay away from her husband. Jinky, through the Pacquaio's spokesperson, Reli de Leon, had already dismissed the rumor.

Despite all the issues hampering his yet-to-be shown film, Manny remains unruffled in the face of intrigues.