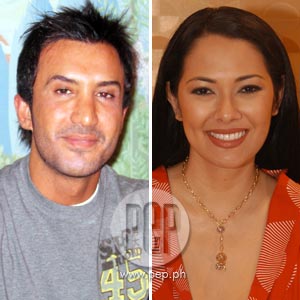 The marriage of Ruffa and Yilmaz Bektas coming to an end was the biggest showbiz breakup in 2007.

On May 8, many were surprised that Ruffa Gutierrez and her Turkish husband Yilmaz Bektas decided to end their four-year marriage. It was in Ricky Lo's column in the Philippine Star that Ruffa first revealed their decision, citing "cultural differences" as the cause of their separation.

The couple met in France in 2000. She was covering the Cannes film fest. He was looking for a boat to buy. Three years later they were married twice: March 2003 in Manila and September in a Muslim ceremony in Istanbul.

"We had a Christian ceremony in the Philippines, and then we had our Muslim wedding in Acarkent. It was the imam that officiated. It was basically a blessing. It wasn't like a wedding for show. It was a blessing for us to be together," Ruffa recalled.

The next three years in Istanbul was a life blessed with two children, Lorin and Venice.

Ruffa returned to the country at the start of the year to host Philippine's Next Top Model. She narrated to PEP, "Ang dami kong tinanggihan na trabaho. But see, I'm living in Istanbul na nga but offers are coming. Sino pa ba ang hindi makakatanggi sa ganoon? Blessings na ang lumalapit sa 'yo, so Yilmaz said he will allow me to work for five years."

Then came the announcement. A feud erupted between the couple. Brickbats and harsh words were thrown at each other. Family members got hurt by in the exchange of accusations.

Weeks later the issue would tone down to give way for a possible reconciliation. Yilmaz suddenly arrived in Manila last August. The couple finally got together to quietly settle their differences.

But they still live oceans apart.

These were the words that Aiko Melendez uttered to her close friends as she left her more than one year marriage with Martin Jickain. Aiko Melendez's publicist Ogie Diaz confirmed Aiko's decision in his morning radio talk show last September 13. Aiko cited Martin's alleged womanizing and partying habits as her reason for wanting to file an annulment.

Flashback. They met in September 2005. In October of 2005, Aiko refuted reports saying that Martin was just "an ardent suitor." By November, the couple announced that they were getting married on February 2006. Aiko was previously married to Jomari Yllana and they have 7-year-old son. Martin is a ramp model and was 2005 Mossimo Bikini Summit 1st runner-up.

Martin said he was certain from the beginning of his relationship with Aiko that they would end up marrying. "I just knew. It's destiny. There's magic between us," he said.

The two are currently locked in a court battle on their annulment and over the custody of their one-year-old daughter Marthena.

The couple are two of the most beautiful faces in the world of showbiz. Richard is the lead star of various fantaseryes on GMA-7 like Captain Barbell, Mulawin, Lupin, and now, Kamandag. Georgina is the niece of 1969 Miss Universe Gloria Diaz and a much sought-after model.

In an interview with PEP November of last year, Richard was happy with the way the relationship was going with the model. Asked about the secret to maintaining their relationship, Richard said, "Wala. We're just compatible and we understand each other."

Sweethearts for almost two years when both decided to go their separate ways in September. Georgina is busy studying in Australia while Richard leads a hectic pace shooting for his numerous tv shows and upcoming movies. Distance and time is the cause for their breakup.

Annabelle Rama wishes that her son and Georgina would eventually get together again in the future. But she also understands their situation:

After ten years of being together, Dennis and Marjorie made the decision to go on their separate ways. Their union had been having problems since last year. The couple decided to wait until after the elections this summer before announcing their decision.

They made their revelation to Ricky Lo in his column last May 25. It was called "trial separation". In that column Marjorie was asking for space from Dennis. Dennis, in a separate interview, blames his ‘bad temper' for their breakup.

The "trial separation" didn't look like to be just a trial but the real thing as well. On June 11, Marjorie filed her annulment papers at the Quezon City Trial Court.

Dennis though is determined to win back his family as well as Marjorie by courting her once again.

On and off: Polo Ravales & Ara Mina

Theirs is an on-and-off relationship. They had already broken off before.

They were able to work things out after the initial breakup. They even said in November 2006 that their relationship was steady as ever. Though she admitted that they only see each other once a week because their schedule would not jibe. Later, the two had a "cooling off" to give space to each other to think about their relationship.

Speculation arose if the Polo would attend Ara's solo concert at Araneta. Everything looked well during the concert of Ara Mina last February 3, where Polo appeared as the special guest. They were supposed to talk to each other the day after but it did not push through because of Ara's exhaustion from the concert. They were able to meet on February 9, only to quarrel again.

Ara admitted that it was her lack of time for Polo that led to the breakup. It was Polo who asked for the split and and Ara found it hard to agree. The last time, it was Ara who broke off.

The two would later get to work together in GMA-7's Lupin. In a presscon for the television series, Ara expressed her feelings about getting back together again.

The singing couple looked good and played beautiful music together. They were frequently paired up in shows and concerts. And this was how the two got together.

Rachelle said that Christian started courting her when they were in the U.S. for the shoot of their music video You and Me in February 2006. It took a while before Rachelle said "yes" to Christian. Both admitted that this was their first relationship.

But things were not meant to be for the two singers, who were likened to the singing tandem of Martin Nievera and Pops Fernandez. On the morning of November 12, fans of Christian and Rachelle were shocked to see the news that they had decided to separate. The couple tried to resolve issues in their relationship but some were deemed unresolvable.

A strong musical force in the acoustic scene, Nina and Nyoy would be seen together in concerts and bar tours. Their closeness soon became a source of intrigue. Eventually, the two become a real-life couple on November 2005.

In an interview with a broadsheet Nyoy narrates, "I courted Nina long after her previous relationship ended. I even informed her former boyfriend [Jimmy Bondoc] about my intentions, as an act of courtesy. I then courted Nina but it took quite a while before we made a commitment with each other."

Nina only has sweet words for Nyoy, "When he was courting me, I felt his sincerity and loyalty even with little things, like when he replies to my text messages or remembers important dates like the first time we met. Actually, the sincerity of his feeling toward me and his loyalty are the reasons why I fell in love with him."

However, their relationship ended in the middle of the year. The two made a "mutual decision" to part ways. Initially, rumors were rife that a third party was involved.

But the two are still in harmony. Nyoy wrote "Someday"and the song was included in Nina's recent album.

The Star Circle Quest Batchmates called it quits after almost two years of being together. Sandara was first linked to SCQ winner; Hero Angeles. The two had a loveteam tandem that thrilled the fans. Joseph was going out with another fellow SCQ contestant, Michelle Madrigal.

Joseph came into the picture hoping to have a reel and real-life tandem with Sandara, who had returned to Korea to pursue her collegiate studies. Joseph later came out on The Buzz admitting to his relationship with the Korean-born star. This shocked the Hero-Sandara fans. The "HeroSan" tandem eventually fizzled out.

The producers also tried the tandem of Sandara and Joseph when they starred in Star Cinema's D' Lucky Ones but it failed to capture those who followed the "HeroSan"tandem.

The relationship ended last July. Joseph said that there was no third party involved and cited their frequent quarreling as the problem. A couple weeks after, Sandara returned to Korea with her mother and sister, hoping to jumpstart a career in her home country..

It was the birthday concert of Rufa Mae and Erik was the guest. Sparks flew and eyebrows were raised. But several weeks later, the two would sing sweet music together and officially became a couple.

However, many thought that the scene was a publicity stunt to cover up issues hounding them. "We talked about it pero hindi ganoon kami apektado," Erik said.

What kept them going was how Rufa Mae fought for Erik.

However in the middle of this year, the relationship was beginning to look fragile. Showbiz Central host and PEP blogger John Lapus accidentally mentioned in the show about a supposed date between Erik and Say Salonzo, a former Pinoy Big Brother housemate. An apparently shocked Rufa Mae, who was celebrating her birthday, couldn't utter a word.

A few weeks later, Rufa Mae was back on Showbiz Central and she was asked to comment on the "kisscandal" of John Estrada and Gretchen Barretto, which happened during Rufa Mae's birthday party in her home. To divert attention away from the scandal, Rufa Mae answered some issues involving herself. She admitted that her relationship with Erik Santos was on the rocks.

The two went through a "cooling-off" stage before their separation. Erik still hopes to reconcile with the sexy comedienne.

It was a question of ‘are they or aren't they?' throughout the year for this showbiz couple.

The two enjoyed their time with each other when they went to the U.S. last Christmas 2006. But around end of January, Alfred and LJ had a cooling off to ease the pressure of their relationship. Both of them hardly had time for each other. LJ was busy attending studies and showbiz commitments; Alfred had tv shootings.

Alfred and LJ patched things up. They would be seen going together on occasions and on movie dates. They even celebrated their anniversary last August.

By November, Alfred hinted problems in their relationship. A month later, Alfred and LJ announced their separation.