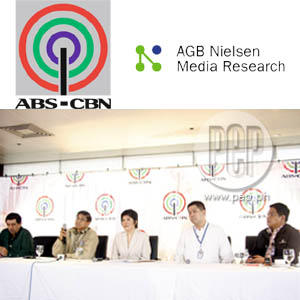 Coinciding with the official filing of the case against AGB Nielsen Media Research Philippines, an emergency press conference was called by ABS-CBN earlier today to explain their basis for the legal action. Shown in the picture are (L-R) ABS-CBN Head of Finance Mike Navarrete, Head of Regional Network Ron Valdueza, Head of Research Vivian Tin, Atty. Maximilian Joseph Uy, and Head of Corporate Communications Bong Osorio.

ABS-CBN network has filed a P63-million civil case against AGB Nielsen Media Research for allegedly failing to comply with their request to conduct an investigation and probe reports of cheating and tampering in the gathering of ratings data for television.

In an emergency press conference called by ABS-CBN earlier today, December 14, at the 9501 restaurant, network officials, led by Head of Corporate Communications Bong Osorio, labeled the matter as a "systematic, organized, and well-funded attempt to cheat in the ratings."

"Today, we have filed a civil case against AGB Nielsen Media Research Philippines for damages and injunction, with an application for a temporary restraining order," read an official statement of ABS-CBN.

DETERMINING VIEWING HABITS. Identifying program ratings is essential because it represents the "viewing behavior" of the public. For the networks, it is one way to have a clear grasp on the preference of their viewers when it comes to programs being offered in specific timeslots.

The end result of these studies is crucial for business since advertisers base their ad placements on the data produced.

In an interview with AGB Nielsen's General Manager, Maya Reforma, a few months ago, she stressed the importance of ratings to the networks and their clients.

"It is the means by which airtime is being traded between the advertisers and the networks," explained Maya to PEP (Philippine Entertainment Portal) in an interview conducted at the AGB Nielsen office in Libis, Quezon City.

"Of course, networks sell airtime and to attach a value to that airtime, it is based on how many people are actually watching. So therefore, the establishment of a rating system is critical to that transaction."

An independent and distinguished survey body is necessary to assure that the figures and result are uniform.

"It has to be a common one because they have to be using the same reference. Hindi puwedeng sa numbers namin hindi ka number one, 'tapos the other one says their number one," explained Maya.

GENERATING DATA. TV ratings are being conducted by setting up first a panel of homes that are randomly sampled to represent the viewing behavior of homes in the areas that are covered by the study.

It is of course impossible to tap all the households in a particular area, given the enormous number—which explains why random selection is carried out. This is the usual practice in conducting widescale survey and research.

After determining the selected homes within the panel, meters are attached to all TV sets in each household. Along with the meter is a handset where names of all members of the household are written. Beside each name is a button that, once pushed by the viewer, automatically transmits to the meter which program and channel is being watched at a specific time.

Through the metering device and the handsets, the television ratings service will be able to report what channels different homes are watching and the types of people watching different channels and programs.

MONEY FOR RATINGS. According to Vivian Tin, ABS-CBN was alarmed when a man suddenly appeared in their Bacolod office to divulge an anomaly in the ratings system being administered by AGB Nielsen.

According to the alleged source, the panel of homes in Bacolod—which serves as the sample tapped by the research agency in generating the data around the area—have been infiltrated by an outside party.

"In the TV ratings research business, the identities of panel homes are closely guarded so that no outside party can approach to induce them to watch channels or programs that they would not normally watch," read Vivien from a prepared statement.

In research data gathering, it is vital that the names, homes, and identification of the selected group being studied remain anonymous and independent from outside interference so as not to influence their actions.

"Being a representative requires that the panel has been properly and statistically sampled," explained Vivien to the press. "Additionally, the panel members must be reflecting their normal behavior... They are watching what they want to watch and when they want to watch it."

A video clip was played during the press conference. The informant narrated in Ilonggo how his group was being paid by a specific organization to scout, then identify, the sample households and bribe the members to deliberately switch channels in favor of the requesting party.

"We moved around barangays," revealed the informant whose face was never shown in the video. "We asked each household where the device is. When we find out that the house has one, we go there."

As revealed, AGB Nielsen gives grocery items "or other things they can use in the household" as goodwill to the survey participants. This is totally legal.

A counter-offer is then offered by the "outside party" to sway the sampled household. "We approach the house and make a counter-offer of P500 cash or groceries. If they accept our offer, which almost always happens because of poverty, they will accept and we convince them to shift the channel to the other station," said the "scared" informant.

Curiously, a network is being dragged as the perpetrator of the illegal act. The exact name of the network was omitted, however, every time it was being mentioned by the source.

"It is ____ [network] that gives us orders," confessed the informant, "... there's seven of us involved and we go around the barangays and we simply look for the AGB meters."

The "network," added the source, was losing in the ratings game in Bacolod, thus explaining the alleged dirty tactic.

"That's why they want to get a handle on the meters so that they can have a share in the ratings and advertising."

When asked if AGB Nielsen had any idea of the unlawful practice, the informant boomingly said, "No"—indicating that the act is solely carried out by a specific "network" and not by the research group.

LEGAL ACTION. ABS-CBN representatives stressed that the civil case against AGB Nielsen was brought about by the media research firm's refusal to heed their call for an investigation.

The Kapamilya network said that they provided all the information they had gathered to AGB Nielsen. ABS-CBN added that "even as we continue to lead nationwide" this didn't hinder them from making a request to the survey agency to "check their panels" and guarantee first the integrity of their data.

"Given the importance of the service and the impact it has to the decisions of networks and advertisers, we have demanded that AGB-Nielsen Media Research Philippines shut down their service and investigate the degree to which their panel has been breached. We asked that they resume their service only after they can fully assure their clients that the panel has been completely cleaned," said Vivian about their formal letter to AGB Nielsen.

A video of ABS-CBN Chairman and CEO, Mr. Eugenio "Gabby" Lopez III, was also shown. He announced, "Today, we have filed a civil case against AGB-Nielsen Media Research Philippines for damages and injunction, with an application for a temporary restraining order."

Atty. Maximilian Uy confirmed that they officially filed the case in a Quezon City court at 1:30 p.m today, December 14, while the press conference was still ongoing.