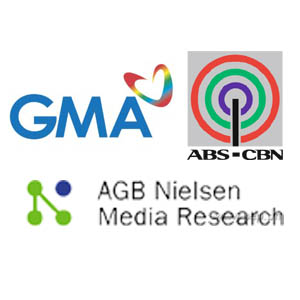 GMA-7 stated that even they have their issues with regards to the data being generated by the AGB Nielsen-led survey.

"For more than four years now, GMA Network has been complaining to AGB about the highly illogical and unexplainable disparity between the cable and non-cable ratings of GMA's programs, which do not obtain in respect to ABS-CBN's programs.

"GMA-7 is keenly interested in getting at the bottom of this if there is any basis at all to the said reports."

HIRED TO BRIBE. In a press conference called by ABS-CBN earlier today, the Kapamilya network had said that someone paid a visit to their Bacolod office and confessed that he, along with others, are hired to locate and bribe some households tapped by AGB Nielsen as part of the sample for the survey and data gathering.

Upon discovering that a household is part of the surveyed group, the hired people would offer a P500 bribe or grocery items to the sampled members in exchange for deliberately switching channels to favor a particular network.

In a video shown by ABS-CBN during the press conference, the "source" was not strongly pinning AGB Nielsen as the guilty culprit for the anomaly. Interestingly, a particular "network" was pointed at as the perpetrator of the appalling act. The name of the network though was censored in the final edit of the video and omitted in the statement.

The informant added, "Of course, we are aware and they [the "network"] are aware that they are losing in Bacolod. That ABS is what most people tune into. That's why they want to get a handle on the meters so that they can watch, wtachamacallit, they can have a share in the ratings and advertising."

ABS-CBN officers insisted that they're focusing their sights on AGB Nielsen after the media research body failed to heed their request for an investigation to probe and verify the confession made by their informant.

"Thus, today [December 14], we have filed a case against AGB Nielsen Media Research Philippines for damages and injunction, with an application for a temporary restraining order," said ABS-CBN Head of Research Vivian Tin.