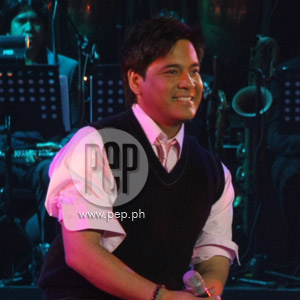 In a span of 25 years, Martin Nievera has released 32 albums, from which he will choose the songs to be performed in his anniversary concert. XXV: 25 Years of Martin Nievera will be held in February 2008 at the Araneta Coliseum.


Martin Nievera graced the December 14 press preview of the play Avenue Q at the RCBC Plaza in Makati City upon the invitation of his long-time friend Rachel Alejandro, one of the main characters of the play.

Martin also told PEP (Philippine Entertainment Portal) about his upcoming concert that will be held at the Araneta Coliseum in February 2008.

"I leave [for the United States December 15] until New Year's then I'll be back to promote and rehearse XXV: 25 Years of Martin Nievera."

"It's 25 years of my music. Everything I ever recorded will be there. Rowell Santiago will be the director of the show, the TV director will be Johnny Manahan—I'm hoping."

PEP asked his repertoire for XXV: 25 Years of Martin Nievera.

"From ‘Be My Lady' to my latest songs to some songs I've recorded but haven't sung live before. We've only had a couple of production meetings already. What's going to be hard is to not forget some songs.

"Ang dami-dami kong songs na hindi pa nagawa—yung iba sikat, yung iba hindi sikat. We don't know which ones to pick, you know? It's going to be a long night of music with a full orchestra led by Mr. Louie Ocampo," he points out.

Who are the guests in his show? "No guests—just me. I never put my guests on my posters. I don't want anyone to think that I'm having guests to bring in more people. If I have a guest, then it's a surprise, it's a bonus for the people who buy my tickets. I want people to watch my show because they want to see Martin Nievera. Ricky Martin—does he have guests? Marc Anthony...John Mayer...do they have guests? No, they have front acts then a show.

"If I don't fill up the Araneta, then I'd still do the same show. It's not a matter of filling up the seats but pagbibigay ng magandang-magandang show," stresses Martin.

COLD CHRISTMAS. The ex-husband of Pops Fernandez also narrated to PEP what happened behind-the-scenes during the Kapamilya Christmas TV special that will air on ABS-CBN this Sunday, December 16. It was taped at the Meralco Theater last Wednesday, December 12.

He gave his own interpretation about Pop's non-reaction. "I guess she's still angry at something. I don't know what. Me, I know I did the right thing. It was her birthday and my mom taught me well. You have to be polite as possible to the mother of your children.

"I don't know how angry or what she's angry about. Maybe she just didn't know what to say or something. I knew exactly what to say since it was her birthday and I wasn't greeted back. But that's okay," he assures.

The Concert Queen was celebrating her birthday that day, December 12.

What kind of reaction were you expecting from Pops? "At least another hi! I'm the father of her children, the least I could expect was a hello but I didn't get any of that. That's okay."

Did you take it personally? "Hell, no! No way! Pops? She's the mother of my kids. I love her. I will never think that she would do anything on purpose to hurt me."


What are your plans this Christmas? "My kids [Robin and Ram]...we're equally busy. They're no longer kids, they're little men. They were supposed to spend Christmas with me but at the last minute, they changed their mind. They will be spending Christmas with their mom here in the Philippines," discloses Martin.