Angelica Panganiban says to rumormongers trying to ruin her lovelife, 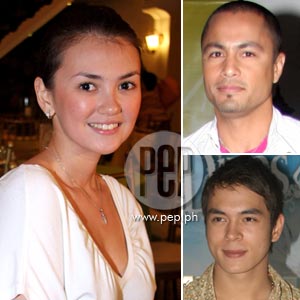 Young actress Angelica Panganiban dismissed rumors that she and boyfriend Derek Ramsey (inset, top) have broken up and that she is now back to dating Jake Cuenca (inset, bottom).


Is it really over?

That is the question everyone asked concerning the true condition of Maging Sino Ka Man 2 mainstays and real-life lovers Angelica Panganiban and Derek Ramsey. A bemused Angelica denied this.

She then explained that she is still with Derek and, as a matter of fact, went with him to Taiwan to support him in a competition that he recently joined.

Because of the rumor, speculations arose to whether Angelica had gotten back to Jake Cuenca, believed to be her ex-boyfriend. It was also said that she and Jake were always seen going out together. Again, Angelica denied this.

Have these rumors affected Derek and their relationship? What was his reaction about Jake's name being connected and all?

On a lighter note, Angelica shared to the televiewers that she met Derek's mother for the first time last Thursday, December 13.

To finally end the rumored breakup, Angelica announced that she and Derek are still very much together. For the people who tried and possibly will still try to ruin their relationship, she only has this to say: "Ang cute n'yo."