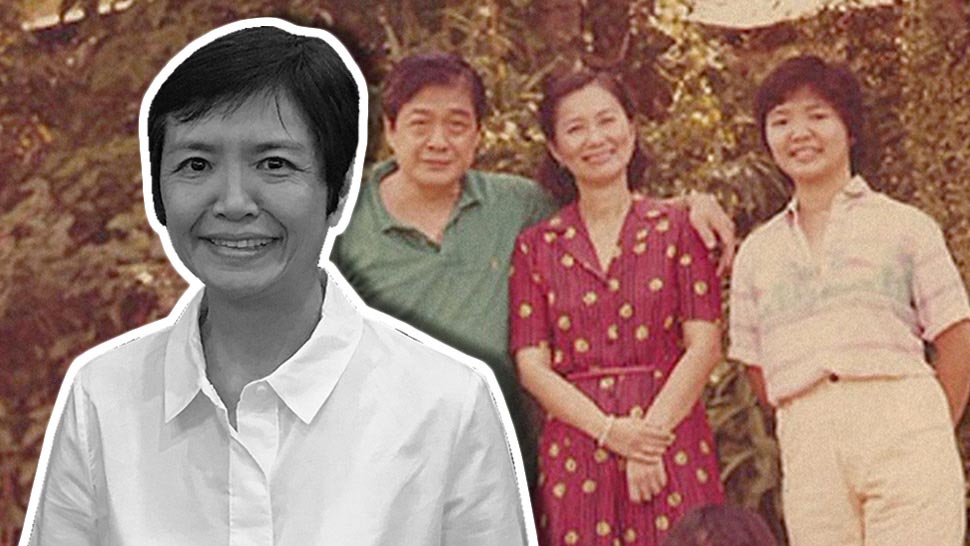 Robina Gokongwei Pe and the rest of the Gokongwei clan grieve for the passing of their patriarch John Gokongwei Jr., at the Heritage Park, Taguig City. The business tycoon breathed his last at 11:41 p.m. of November 9, 2019, at the Manila Doctor's Hospital. He was 93 years old.

On the first day of the wake of her father, the late industrialist John Gokongwei Jr., Robina Gokongwei Pe, gave an eloquent eulogy laced with humor and tenderness.

Pe is the president and CEO of Robinsons Retail Holdings Inc. and the eldest of the tycoon's six children.

Pe talked about different milestones in her life, and how her father had guided her along the way. Through her anecdotes, we get a closer glimpse at what the businessman was like as a father. 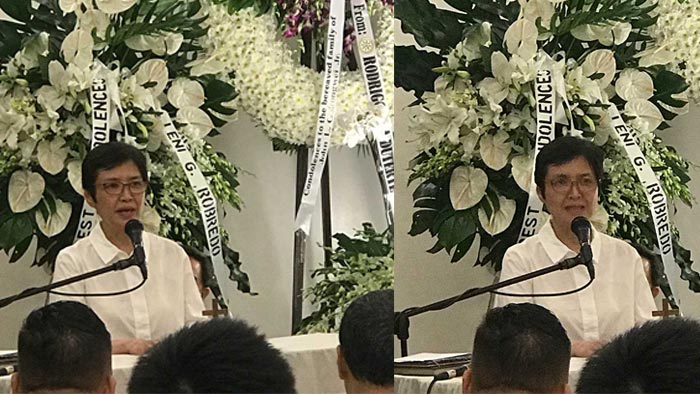 Read the full eulogy below:

Thank you very much for coming tonight.

A week before dad passed away, he was giving advice to my son, Justin, who's 24, and his advice was: "You have to play around!"

That was my dad, John Gokongwei Jr. He was like a box of chocolates, you never know what you'll hear.

He had been lying in bed for six weeks, unable to speak well because of a tube in his mouth.

Other patients would ask for food. He kept asking for company financial reports.

When I was little, his warning to me was: If you don't work, you don't eat.

I made sure I had my food.

A lot of people would ask me, "Why is your dad so fat?" That's because he worked so hard. As he said, if you don't work, you don't eat.

My dad was ahead of his time as a mentor father.

If he didn't throw me into our Robinsons Department Store bodega when I was right out of college, I don't think I would be able to manage our business.

He even made sure I started in the bodega, the only place where there is no air-conditioning, and he told the HR head that I had to time in and time out.

His other advice was to never give up.

When I was in U.P., I joined the varsity swimming team.

But even after practicing two hours a day in a swimming pool full of moss, I still ended up as the supreme "bangko" of the team.

One day I came home crying. I told my parents why was life so unfair, why did I become a "bangko," and my dad said that what I experienced was only the start, and it will make me become a stronger person.

He said that I should be happy that I even qualified for the team.

He also said that he lost his father when he was 13-what could be worse than that?

I did not know that the Lt. Colonel, and now senator Ping Lacson, was helping my dad negotiate with the kidnappers.

After five days, and still getting no money, the sidekick of the leader of the gang, came to me with a worried and angry face.

I was so sad to learn that my dad was giving me away.

Little did I know, that it was the advice of Senator Ping to my dad. To prolong the conversation, so they can find us.

After seven days, they found us.

That was how good Senator Ping was, and to think there were no mobile phones then.

By the way, I did not realize that the good senator had already disclosed this in this Twitter account.

When my dad turned 60, he held a party and announced his retirement.

Henry Sy Sr. was a guest and Mr. Sy told him: "John, you are going to face three problems when you retire.

"One is what you are going to do after working for 50 years.

"Two is who is going to succeed you.

"Three is the worst problem of all-how to deal with five sons-in-law."

In his speech in 2017, when he received the Management Man of the Year Award from the Management Association of the Philippines, he said, "I would say that the best sign of my management skills has been to manage my sons-in-law, most of whom are businessmen working with their own family businesses, and a lawyer.

"Guess who is the most difficult to manage?"

My dad was always known to be a sloppy dresser and cheap when it comes to dressing up. His tie always had a stain from ice cream or coffee.

When I got married in Hong Kong in 1993, he did not even bring with him a new suit.

But my wedding ninong, the late Geny Lopez Jr. said that he was wearing a tuxedo.

My dad got kind of embarrassed and said he had to upgrade his outfit. He also would like to wear a tuxedo.

He did not even think of buying a tuxedo, he decided to rent one!

And he was so happy that the rental company had his size-double XL shirt and size 44 pants.

My dad was a man always in a hurry.

He can finish a meal in five minutes, and if you notice that his children do the same thing, you know where our genes came from.

He was always in a hurry that at the age of 60, he was asking why I was not yet married, as the children of his friends were already all married.

Finally, when my dad turned 67, I decided to get married.

He was so excited that during the wedding ceremony, he walked ahead of me and my mom got mad at him and said, "Please wait for the bride!"

As I became more involved in the business, he continued to encourage me not to be afraid of making mistakes.

By this time, I already had so much to eat because I was working a lot.

I liked his words of encouragement, congratulating me for simple wins.

But this year, he had other reasons for congratulating me.

He had forgotten about the business and was now congratulating me for the UP men's basketball team entering the Final Four for the second year in a row.

He knew what his daughter really loved the most. That's why I loved him for that.

(I hope the beloved priests from Ateneo officiating the mass tonight will pray for U.P.'s win on Wednesday).

Get some rest, dad. We will look at the financial statements for you.

By the way, we did not rent his outfit for today. Somewhere along the way, he decided to buy himself an expensive suit, and we made sure that the tie did not have a stain.

Before I end my talk, I would like to thank a few people who took care of my dad all these years until his last days: Uncle Antonio Go, bodyguards Macoy and Bong, nurses Jeny and Delphin.

Thank you very much for staying with dad.

Free e-book!
This is the story of how billionaire John Gokongwei Jr. learned to dream big, work hard, and never give up.
By signing up, you agree to our Terms of Service and Privacy Policy.
Check your inbox!
Please check your inbox for the mail we've sent from Summit Media. It may take a few minutes. Check your spam/junk mail or promotions folders as well, in case you don't see it. You may then download the free "Big John" picture book. Please do so immediately as it's only available till November 15. Enjoy!
Sharing is caring!
Copy Link