Bianca Gonzales: The girl next door 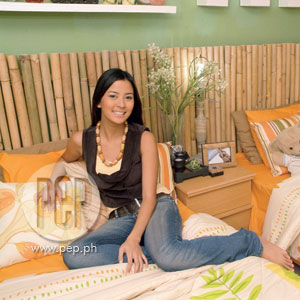 Long after PBB Celebrity Edition went off the air, Bianca still finds herself being judged by other people for what they saw on television. “I’m still struggling,” says the 23-year-old Bianca. “As much as I’d like to think na people have accepted how things turned out for me paglabas ko, siyempre marami pa ding tao who have their own opinion, and I respect that. Except na, ’yon nga, mahirap. It&a

She originally wanted to work behind the scenes.


A mass communication graduate of the Ateneo de Manila University in Quezon City, Bianca had already modeled for television and magazines when she landed a job with ABS-CBN’s Creative Development Group. “I was supposed to be a writer for this show on Studio 23,” she recalls. “Isa sa mga hosts dapat namin, si Drew Arellano.”


The show didn’t get off the ground. Instead, Bianca found herself signing up with Boy Abunda’s talent management company, with Jet Valle as her handler. Boy and Jet also have Drew under their wing.

Bianca told Jet she preferred to follow in the footsteps of her elder brother, JC Gonzalez, who used to co-host Breakfast and Team Explorer on Studio 23.


Her first hosting job was for ABC-5’s short-lived Game Channel, opposite another newbie, Iya Villania. ABS-CBN’s Cinema One: Review Night followed. “That’s where I first got to work with Ryan Agoncillo. So parang sobrang perfect timing talaga, everything!”


Early this year, the opportunity arose for her to join Pinoy Big Brother Celebrity Edition. She had initial misgivings: “Kakayanin ko bang malayo sa family ko?” But her family—and her then-boyfriend, TV director Lino Cayetano—proved supportive. “Basically, they said whatever I decide, they’ll support me all the way.”


Inside the Bahay ni Kuya, Bianca became especially close to Bench model Zanjoe Marudo. Their closeness did not go unnoticed, and soon a Zanjoe-Bianca fan base rose.


Then came the fallout. After PBB (she placed third in the show’s grand finale), she was fodder for tabloid gossip. She was labeled a playgirl, a two-timer. The devastated Bianca worked hard to regain Lino’s trust, not to mention working hard to wrest back her reputation as a nice girl. And she bounced back. She came out of the experience a stronger person—and a really busy one.


“Paglabas ko, ang dami na talagang jobs waiting for me. I owe a lot din siyempre to the exposure in Big Brother.”

But she’s still saying no to acting.