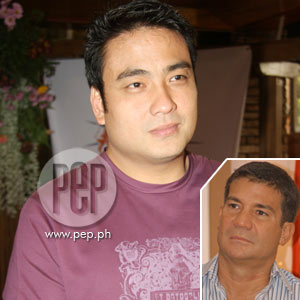 For actor-turned-senator Bong Revilla, his well-publicized rift with Optical Media Board (OMB) chairman Edu Manzano is water under the bridge.

Bong and Edu are currently in the middle of a bitter feud after the former conducted a raid at the Makati Cinema Square last December 4 and apprehended a number of vendors blatantly selling pirated videos in DVD format.

For Edu, the act initiated by Bong was a transgression of his role as OMB chief. Bong also made a comment questioning the competence of the Manzano-led bureau in carrying out its role, particularly in curbing various forms of piracy.

ALL THOSE YEARS AGO. Moving on to less serious issues, Pia asked Bong's reaction regarding Melanie Marquez's confession last week, also in Showbiz Central, admitting that she played on Bong's feelings during the time the charming action star was enamored with her.

He'd rather not elaborate on the subject, saying, "May kanya-kanya [na] kaming buhay so leave it at that."

BE LIKE MOM. When asked about his reaction to daughter Inah's open declaration that she has a crush on young and controversial matinee idol Dennis Trillo, Bong grinned and coolly gave a father's point of view.

"I heard that three months ago," he recalled. "Humahanga naman ‘yong bata. Nabasa ko sa pahayagan and I asked her, ‘is this true?' paghanga lang naman ‘yon," he smiled.

Bong, whose movie Resiklo will be shown on Christmas day as part of the Metro Manila Film Festival, confided how hard it is for a parent to draw the line when it comes to their children.

According to Bong, Inah doesn't need to look very far in finding for a role model to emulate.