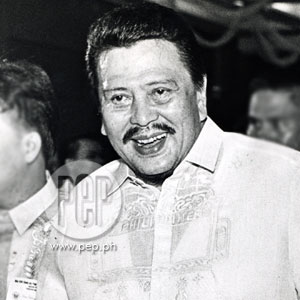 Former San Juan Mayor and former President Joseph ‘Erap' Estrada is credited for establishing the Metro Manila Film Festival together with the late Guillermo de Vega. The tradition of having only Filipino movies in our cinema houses has helped the industry keep our film output alive.

The Metro Manila Film Festival is celebrating its 33rd edition of showcasing local films during the Christmas season. It has been a tradition for Filipinos to watch movies during this time and they get to appreciate good Filipino films as well.

How it all started. Before 1966 in Manila, the Dalisay Theater and Life Theater were the cinema houses that were showing local films. But in 1966, Manila Gatpuno Antonio J. Villegas began what is now known as the Manila Film Festival, which would exclusively bring Filipino films to the city's cinema houses for 10 days, starting on June 24, Manila's Foundation Day.

Banking on the success of the Manila Film Festival, the Philippine Motion Picture and Producers Association (PMPPA) in 1967 also sought to have their own festival in Manila and other key cities of the country like Baguio, Davao, Cebu, Iloilo and Bacolod.

In 1975, the PMPPA President and San Juan Mayor Joseph "Erap" Estrada sought the help of the late Guillermo de Vega to start off what we now call the Metro Manila Film Festival (MMFF). The original aim of the MMFF was to benefit of the Movie Workers Welfare Foundation (Mowelfund).

The first Metro Manila Film Festival was held on September 11 because it was former President Ferdinand Marcos who gave his approval for the project. September 11, incidentally, was the birthday of Marcos.

But because September was a lean period, Estrada sought the help of former First Lady Imelda Marcos to have the festival moved to December. In 1976, Presidential Proclamation No. 1533 assigned the Metro Manila Commission (MMC) as the coordinator of the MMFF. Mowelfund was still the sole beneficiary of the MMFF's proceeds.

In 1986, with the change in government leaders, additional beneficiaries were added to the MMFF: the Film Academy of the Philippines (FAP) and the Motion Picture Anti-Piracy Council (MPAFPC). The MMC would later become the Metro Manila Development Authority (MMDA), which now oversees the film festival.

Critically Acclaimed Films and Award-winning Actors. The MMFF has seen its good share of highly praised films that we still watch today in movie channels and on free tv.

In the first year of the MMFF, Diligin mo ng Hamog ang Uhaw na Lupa was proclaimed the Best Picture. The film was produced by Erap, which also won him the Best Actor trophy.

1977 saw Vilma Santos in one of her most daring roles for Burlesk Queen. It won seven out of the 10 competing categories, including Best Picture, Best Director (Celso Ad Castillo), and Best Actress. Vilma would later win acting awards at the MMFF for Karma (1981) and Imortal (1989)

The late '90s saw a resurgence of quality films produced for the MMFF. First was Magic Temple in 1996 by Star Cinema, which featured technical excellence in almost all of the categories of film making. It won Best Director and Best Original Story trophies for the tandem of Peque Gallaga & Lore Reyes as well as Best Cinematography, Best Editing, Best Musical Score Best Visual Effects and Best Production Design.

GMA Films turned out world-class film productions in 1998 and 1999. The much-hyped bio-pic of our national hero would come to fruition with Jose Rizal. Cesar Montano would grab Best Actor honors and almost all of the trophies were swept up by the film. A year later, Cesar Montano would not be able to repeat as Best Actor for Muro-Ami. Christopher De Leon took it home for Bulaklak ng Maynila. But Muro-Ami won Best Picture, Best Director (Marilou Diaz-Abaya), Best Cinematography, Best Original Story and Best Screenplay.

Star Cinema staged a comeback for the festival with the family drama Tanging Yaman. Lead star Gloria Romero, who played a matriarch beset with Alzheimer's, bagged the Best Actress trophy at the age of 67. The film also won other major awards, including Best Picture, Best Director, Best Cinematography, Best Story and Best Screenplay, among others.

The romp of quality movies would continue in the next several years. In 2001, Yamashita: The Tiger's Treasure and Bagong Buwan battled it out. 2002 had an all-star cast battle royale between Regal Film's Mano Po and Star Cinema's Dekada '70. Comedy-drama ruled 2003 when commercial director Mark Meily jumped into the mainstream film industry with Crying Ladies. Last year, Joey Reyes' Kasal Kasali Kasalo ruled the box office and garnered critical acclaim.

This year, the sequel to KKK is Sakal Sakali Saklolo. It is gaining early ground because of its success last year. It is predicted to do well in the box-office and in the awards circuit. Besides SSS, Joey Reyes helmed a family comedy-drama starring Sen. Jinggoy Estrada. The senator's good friend and fellow senator, Bong Revilla and Vic Sotto aim to provide a fanfare for the whole family with Resiklo and Enteng Kabisote 4, respectively. Action-drama is the staple of both Anak ni Kumander and Banal. Regal Films matriarch has three movies showing in this year's MMFF — comedy Desperadas, suspense thriller Shake Rattle and Roll 9 and the drama Bahay Kubo.