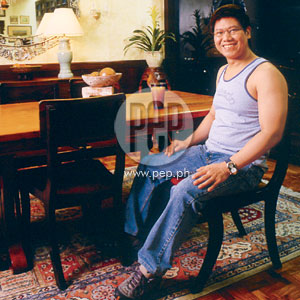 If I only knew how to add with decimal points and draw a straight line, I could have been an architect. That was an ambition I actually entertained after I finished a four-year journalism course and was already earning substantially as a magazine editor. "I learned to edit first before I realized I could write." (YES! January 2007 issue)

When I left a top-rated show to migrate to the U.S. in 1998, I thought I finally had the chance to study architecture. I had it all planned in my mind: I was going to twist the arm of my Los Angeles-based Mom and make her shoulder my tuition fee. All I had to do was throw a tantrum. After all, they didn’t spend much on me while I was growing up.


But having always been a very considerate son (with occasional tantrums), I decided to supplement my largesse with a side job, one that would cover my food and rent in Boston. So off to downtown Boston I went, and saw a store sign that said, “Wanted: Grocery Clerk.” The owner found me “very personable”—his words. I wanted to tell him, “Pardon me, but back home TV star ako!”


There was only one problem: he wanted me to take a math exam. I froze in my tracks and told him, “I’ll be back in a while!” Of course, I never went back, and for all you know he could still be waiting there. Next day, I applied for a slot in a creative writing course at Harvard and got accepted. Goodbye, architecture.


My interest in structural design began when I was barely out of my teens. We were living in Sta. Mesa at that time. Two of my older siblings had gotten married, and the one that came before me was away doing rural work as part of his requirements as a medical student. My Mom was in the U.S. and my Dad worked in the province. As the youngest, I was the only one left in that house. I told Dad that maybe it was time to move out, the place had become too big for us.


He agreed on one condition—I was to do the house hunting. Deal. When he came home after a month, I gave him three options: a brand-new house in Little Baguio in San Juan, an old rundown but spacious house on Scout Fuentebella, and a new medium-sized house in La Vista that could be altered to suit our needs.


He chose the La Vista property. Again, I got an assignment—to attend to the renovation. Overnight, I learned about the different types of wood and began to appreciate the different designs of moldings and cornices.

It was tough. Since I was also pumping some of my own money into the house, I had to take on three jobs (aside from regular office work, I wrote for a newspaper and edited souvenir programs on the side). In between, I supervised the renovation, buying construction materials and closely coordinating with architect Sammy Dario.


It was then that I realized I could do structural designs. Architect Dario let me do the living-room ceiling. I told him the design in my head, and he put it down on paper.


After seven years, I embarked on expanding the house and did most of the designs, which required knocking down walls and laying out marble floors. But then, after that, for five years I set aside designing to learn the ropes of television and save money for my dream house, which I intended to design myself. Unfortunately, the money I saved was lost in a bank run while I was in the U.S. I had to come back and start all over again. I accepted a hosting slot in Startalk, which I now enjoy doing immensely.


Back in Manila, I developed road rage, which gave me added incentive to turn a small condominium unit in Greenhills into a halfway house. That way I didn’t have to travel all the way to La Vista every day. (This was around the time they were digging on Katipunan Avenue.) As usual, I took charge of the renovation, which cost me a fortune since the contractor overcharged me (his furniture supplier squealed on him).


When that condo unit on the 14th floor proved too small, I negotiated with the building developer, Robbie Leviste, for the penthouse on the 36th floor. Reasonable person that he is, he agreed to let me have it for, well, the most reasonable terms.


Those were really hard times for me. I had very little money because I had just finished paying for a Baguio property, a three-story townhouse in Green Valley—the design of which, you guessed right, I did.


The penthouse project also drained me physically and emotionally—I constantly fought with suppliers—because it went through a 10-month renovation period. (I can be very meticulous!) Every night I conferred with my contractor, engineer Frankie de Leon, and young interior designers, Peter Reginio and Gemma Cui.


But it was the kind of difficulty (hey, it’s not fun looking at bathroom tiles and toilet fixtures every day) that also made for a fulfilling experience. I was again able to test my architectural skills by providing solutions to a long list of design problems that came with a penthouse with a U-shape and a very irregular layout.


To shorten the look of a corridor that seemed to run the length of EDSA, I had latticework panels installed from the ceiling to create visual divisions. And so that no two doors faced each other (bad feng shui), I had a faux wall erected, and the result was even more dramatic.

After I moved into this penthouse, I had a next project: a house for my mother.


For close to 15 years, my Mom lived in L.A., and when she got ill, I decided to bring her home and got her a small piece of property in Valle Verde. But bound as she was to a wheelchair (she is now completely bedridden, sadly), her house requirements weren’t much. After doing the floor plan—basically a large-enough bedroom, a small living room, and an even smaller kitchen—I turned over the project to my contractor and left it at that.


Later I decided to redo my one-year-old penthouse. With a little more budget this time, I was able to get the services of the very talented and seasoned interior designer Santi Santos (he refused to accept payment in the end, bless him), who did the homes of a lot of big-time Californians, including George Hamilton.


Santi brought with him his own people, who all became personal friends of mine—contractor Jon Robles and couple Alex and Mariz Medina, who did a lot of marvelous stenciling to my house.


And now Santi Santos’s work is finished, and I am more than happy with the results. Trouble is, there’s that itch again. Unfortunately, you can only do so much with a condominium. And there is the small matter of money.

I figure I have two choices: I can finally take up architecture once and for all and become a licensed architect. Or I can seek psychiatric help.