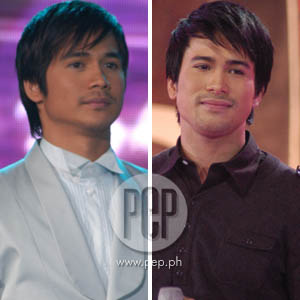 In a counter affidavit she presented to the court today, December 20, former Pilipino Star Ngayon entertainment editor Veronica Samio distanced herself from the libel case filed against her and columnist Lolit Solis by Sam Milby (right) and Piolo Pascual (left). "Again, although I was the named entertainment editor in the newspaper, I was not responsible for the actual editing or publication of the article complained of since I did

Samio—being the designated entertainment editor of the newspaper—was implicated by the two complainants in the P12-million case they filed last November 16.

The lawsuit stemmed from an article written by Lolit in her column Take It, Take It last October 15, saying that she saw Piolo and Sam together at the poolside coffee shop of Sofitel Hotel in Manila on October 12.

While there's nothing wrong with two men relaxing in a public place, the two actors were offended by the way Manay Lolit angled the write-up. They were even more incensed with the headline on the front page: "Sam and Piolo, naglalampungan."

The two actors vehemently denied that they were together at the location cited by Lolit in her column.

"We are suing because our dignity and integrity have been assailed," said Piolo in a statement. "She has disrespected us as colleagues and human beings and the only way left to restore this respect is through the courts of law."

NO LONGER ON BOARD. In her counter affidavit, Samio contested that she was on leave from her duties as editor when the article came out.

She also dismissed the accusation that she was the one who thought of the controversial title, aside from the fact that she never really read the draft of Solis's article before publication.

"The subject news article allegedly came out in the newspaper on October 15, 2007. Assuming that is true, then it was prepared or edited the day before [or October 14, 2007]. Again October 14, 2007 being a Sunday was my rest day. Furthermore, I was on official terminal leave from October 15, 2007 to October 31, 2007. Hence, I could not have edited the subject article. Neither could have I made the said headline," explained Samio before adding, "For the record, I do not have knowledge of or participation in the composition, editing or publication of the article in question."

She then went on to mention other similar cases in the past and the grounds used by the court in dismissing a libel case against an individual. Samio cited a case tried in New Jersey, in which the court ruled that an accused party cannot be held liable of any wrongdoing if he or she did not participate in the preparation, editing or publishing of an alleged defamatory article.

In this case, according to Samio, she cannot be pinned down because she's completely oblivious of the content of the alleged damaging piece.