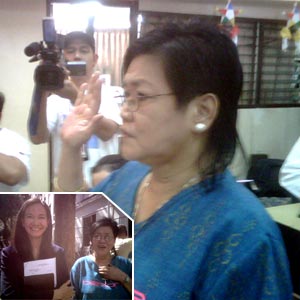 Talent manager and entertainment columnist Lolit Solis submitted her counter affidavit earlier today in response to the libel case filed against her by Piolo Pascual and Sam Milby. Lolit poses with the actors' lawyer, Atty. Joji Alonso (inset), outside the Manila City Hall.

"The allegations in the Complaint Affidavit are nothing but general conclusions of law without any legal leg to stand on. A perusal of the newspaper article subject matter of this Complaint for Libel would show that it is a fair report on two celebrities, made well within the ambit of the constitutional guarantee of freedom of speech and expression.

"A close scrutiny of the article subject of the libel complaint would show that contrary to the allegations in the Complaint-Affidavit, I never imputed any malicious or defamatory condition to either Piolo or Sam.

"I never called the complainants ‘gay' men. Neither did I imply that they were.

"As far as the heading of the article, I had no hand in the heading placed to introduce the article that I wrote. Headings of news articles are the prerogative of the newspaper editor.

"Clearly, with the article, never did I ever state or impute upon the complainants that they were gay. In assessing the nature of the article I wrote, the complainants made a forced reading and ascribed undue significance to the words and sentences in the article which I never implied or meant to impart.

"I carry no grudge or resentments towards any of the complainants. I have no motive to try to dishonor, discredit or besmirch their reputation or character in any way.

"I never intended to hurt the complainants' feelings but I was merely exercising my right to practice my profession, and my freedom of expression (to receive and impart information), both as an ordinary citizen and as a reporter.

"It was the complainants' own acts of publicly presenting their one-sided, constricted and hypersensitive assessment of my article which fuelled doubts in the public's perception of their sexuality, and influenced the minds of the public to suppose that I intended to dishonor, discredit or besmirch their reputation in any way.

"The complainants are admittedly public figures under the constant scrutiny of the public eye. Complainants are constantly embroiled in controversies written about and discussed in all forums of mass media. It is therefore, very surprising, if not questionable, why they have suddenly become so onion-skinned.

"The issue regarding the complainants gender has long been the topic of discussion of showbiz columns in broadsheets and tabloids alike. Other writers have written seriously incriminating articles about these two actors and have directly brought their gender preference to question."