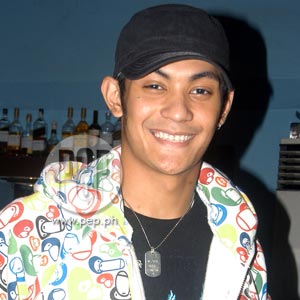 "I really found my true self. Talagang all the hardships you could think of, I went through in 2007. But I don't regret this year because it makes 2008, and all the other years to come, better," Gab Valenciano said reflecting on his experiences this year.

Gab Valenciano was a bit apologetic for spilling some secrets about his family Christmas traditions to PEP (Philippine Entertainment Portal). He narrated that they have this weird tradition of dressing up in their household when the Christmas season begins.

"Christmas is a wild thing also, especially when we put up the tree. If you were there, you'd probably see Gary V in a way you've never seen him and you won't respect him ever again. Let me just give you an example. I came out in a cow suit. My brother [Paolo] came out in a Sumo suit. And my dad came out with long curly hair and spandex...," he narrated, laughing.

"It's just a Valenciano tradition. It's a tradition which I will have with my kids when I get older. It's a time for stupidity. That's how we celebrate our Christmas. And you know, it's fun. Then, that's how the real colors come in our family," he said.

Gab also recalled that the Pangilinan side also has a wild New Year celebration.

"We have a basketball court and we buy fireworks and all these things na paputok talaga. And we just do it ourselves...Crazy. Ok. I have 25 cousins. Boys, girls. Young, old. Oh, my lord. And you have to imagine with all the fireworks, it's so hard to control all of them ‘coz they're all running around and they want to light it also. It's a crazy New Year but it's a great way to start. Kasi, siyempre, tawa kayo nang tawa. Kasi feeling ko may mahihimatay na sa sobrang wild!"

Reflecting 2007 , anticipating 2008. Gab appreciates all the experiences he went through in 2007.

The son of Gary V said, "It's my year of shaping. It's my year of finding out who I really want to be. That's pretty much how 2007 was. But there were times that I was really happy also. Like 2007 was the year I found my girlfriend now, of course. And also, the family has never been this close. And all the trips out of the Philippines was fun. And so, 2007 was not just a problematic year for me but a very complex yet gentle year."

He is also looking forward to what 2008 has in store for him.

"2008 is about change. It's a year of change. How can I say it? It's going to be a year where new things will come, new and better things. And I'm very, very excited to see what's to come.

"This is why I'm going to the States next year. I found out only in 2007, I realized I want more in life. I'm not saying that there's nothing here in the Philippines. I'm saying that when it comes to film and music, siyempre mas lamang talaga kung nasa States," Gab revealed to PEP.

So, is he prepared to live alone in the U.S. next year when he takes up Film and Media Production at M.I. or Musician's School of Technology?

Gab continued, "As of now, no, I'm not. That's why I'm preparing myself. I'm actually gonna start living in an apartment by myself, just to prepare myself, just to see how to live alone."

So you're scared living all alone in the U.S.?

"Actually I am. Actually I am ‘coz I'm so used to going to my mom, to my dad, to my best friend and talk to them about problems.

"We'll see what happens. But I believe that the Lord will help me out next year," he said with a positive outlook.