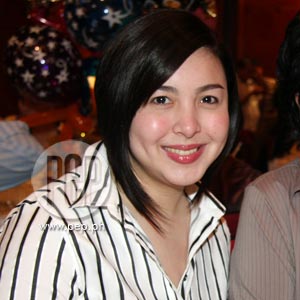 "As a father, I have nothing negative to say [about Dennis]," Marjorie told PEP [Philippine Entertainment Portal] last December 1, during the birthday celebration of Cesar Montano and Sunshine Cruz's youngest daughter, Angel Francesca.

"Wala naman akong masabi. I don't think he has anything bad to say about me. Ganoon din ako, I will not speak ill of Dennis ever," clarified the neophyte politician.

According to Marjorie, living separately did not hinder Dennis from carrying out his obligations, particularly towards the children.

For five years, Marjorie, Dennis and their kids made it a habit to spend Christmas with Claudine and Raymart. This year will be no different.

The couple, who separated early this year, have remained "friends" and on speaking terms. For the Yuletide festivity, Dennis's presence is a must to make the kids happy.

Said Marjorie: "There's no reason naman for Dennis not to join us this Christmas. Most probably, makakasama namin siya.with the children."

As to the rumor linking her to Caloocan Mayor Recom Echeverri, Marjorie politely begged off.

"There's nothing to clear," she said. "I don't want to talk about him. It's very awkward kasi we work together and hindi naman dapat nasasalihan ng intriga ‘yong trabaho namin."