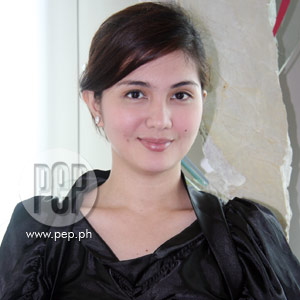 After taking a short hiatus from acting, Dimples is busy once more with a number of projects keeping her preoccupied until next year.

"Well I just finished One More Chance, and then I just also finished Altar. And I'm now shooting Waiting For Love of Aga and Anne [Curtis] also for Star Cinema and Viva. I'm also doing Lobo of Angel and Piolo," Dimples excitedly told PEP (Philippine Entertainment Portal) during the Cinema One awards night held at the Renaissance Hotel in Makati City.

She also praised her co-star Angel Locsin, whom she described as a good actress.

"Madalas kaming magkasama and magka-eksena because I'm Angel's bestfriend sa soap," she relayed. "Angel kasi is a very fantastic actress. This time, you will see her more with a comic relief, which you've never seen before. More comic, more sensual."

Though her hands are all tied up with work, the pretty actress is not complaining.

BRIGHT CHRISTMAS. She's been in the business for several years already. Does she see any change in her career?

Dimples sighed deeply before saying, "Dati kasi, I really like acting but I think it was robotic for me before. My mom kasi [kept] on telling me ‘Anak, you go to ano, you do this, you attend that,'" she recalled.

For the Yuletide season, Dimples opted to celebrate here in the country, together with her family, this year.

"Last year, we were out of the country. I think my family would be spending the traditional one this year," said Dimples excitedly.

Dimples is actually excited for her daughter. She wants her toddler to experience a Filipino Christmas by riding in a horse-drawn carriage.

"Kasi I have a three-year-old daughter and I really want her to be able to ride the kalesa all over town na may Christmas lights, like that," she beamed, picturing the bright lights that traditionally decorate the streets of Manila during the festive season.