Part 1: Showbiz Shockers of the Year! 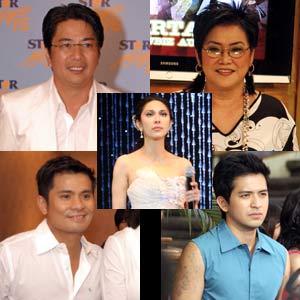 There's a story about a lady fighting for love, and also a guy professing his love for his belle. There's another which talks about a woman completely letting go of her past. Then there's also a gay issue, and of course, the network war. These are just some of the showbiz events this year that unfolded with drama and suspense, eliciting public sympathy or judgment, and even heated debates among PEPsters.

That's one word to describe showbiz this year.

Two people are okay today, they're fighting the next minute. Celebrity couples were so in love a few months back, they're separating on their next TV appearance. Almost every month, something would disrupt the equilibrium and get the stars embroiled in a spat or a word war.

And right before the public eye, the events unfold. Showbiz buffs talk about them. They sympathize with their idols and even take sides. We see the drama, hear the lines worthy of an acting award, and get hooked on the entire debacle.

PEP (Philippine Entertainment Portal) recalls the top 10 showbiz news that shook the lives of celebrities and shocked the country in 2007.

It was pure tabloid heaven right from the start.

On a calm November 7, during the taping of All Star K at the Broadway Centrum, young actress Cristine Reyes did more than just lend her presence and sing at the popular videoke Sunday game show hosted by comedian Allan K and singer Jaya R.

She gained both an enemy and a controversy all in one serving.

The scene was relayed to the media, and a video clip was even shown to the public as proof of the confrontation: Carlene Aguilar makes a beeline towards Cristine, then stoops to whisper a word or two before walking away.

The Impact. It didn't take long before the reason behind Carlene's improbable behavior was revealed. Was it jealousy that drove the former beauty queen to lose her poise?

Carlene had given birth to Calix Andreas, her son with Dennis Trillo, last September 22.

The spotlight fell heavily on Dennis's shoulder. The "confrontation" scene between the mother of his son and his rumored girlfriend was a blow to his shy-guy image.

Instead of snuffing out the fire, Dennis's silence only amplified the wrath of some people. The most vocal critic of Dennis was Cristine's older sister, Ara Mina, who openly lambasted the award-winning actor for his unwillingness to make a statement to appease the warring parties.

But nine days after the filing of the case, the two women in Dennis Trillo's life, with Cristine's lawyer Dexter Licuanan acting as mediator, met at the Hotel Rembrandt in Quezon City.

Apparently moved by Carlene's apology in The Buzz on November 18, Cristine decided to put anger aside and scrap the legal case.

Cristine and Carlene had an emotional one-on-one talk. The tears shed by both parties during the conversation washed away all the animosity between them.

After settling their differences, Cristine and Carlene opted to keep quiet and promised not to talk about the incident to the press again.

As for Dennis, he countered reports claiming that he was insensitive to the issue. Unknown to the public, according to him, he was constantly communicating with both Carlene and Cristine, and even with Ara, to iron out the mess.

Hot Topic Meter. Showbiz had its share of confrontations this year. But the Carlene-Cristine incident caught the public eye. Why? Because it was real-life drama captured by the camera. No director or scriptwriter. The characters involved did not earn any talent fee. It was the story of a lady fighting for love, for the sake of her baby.

There was no issue. No drama. Just an announcement about the status of his marriage to former 1995 Miss Australia Michelle van Eimeren and his relationship with Asia's Songbird Regine Velasquez.

The first bomb: "I'm separated. Michelle and I are separated, and we have been... for a long time."

The second explosion was for Regine: "I love her, I'm crazy about her."

The Impact. Those statements of Ogie in the June issue of YES! magazine put a period to all the speculation that had nagged him for several years.

It was also welcome news to all the fans of Regine. Finally, their idol found love.

But some took the announcement negatively. They went as far as branding Regine, "mang-aagaw ng asawa," and Ogie, "manloloko."

On August 28, Regine Velasquez became emotional when she addressed the downbeat comments hurled at her and Ogie.

She said, "Alam din po namin na there's one person who has kept her silence as well the whole time, at gusto ko pong sabihin sa inyong lahat that Michelle and I are okay. We have talked about this matter in private like responsible adults should. At bahagi po ng ikinaliligaya ko ngayon ay ang pagkakaintindihan naming dalawa pagdating sa pribado naming buhay.

"We know that you love us at maraming-maraming salamat po ulit. Hindi n'yo po ipinagdamot sa amin ‘yon nina Ogie at Michelle. Kaya we are coming out in the open with this. For the first time in public, sa harap po ninyong lahat, makakausap ko po si Michelle Van Eimeren-Alcasid."

Michelle's phone conversation with Ogie and Regine on SOP, GMA-7's Sunday afternoon variety show that same day, made it easier for the resistant people to accept the course of things.

On a separate note, Ogie's admission of his love for Regine affected the box-office results of her movie, Paano Kita Iibigin, with Piolo Pascual last June. The promotion was supposed to capitalize on a potential love angle for Regine and Piolo, but with Ogie's declaration of love for the movie's female lead, the plan flopped.

Hot Topic Meter. The issue involved two big names in showbiz, and it solved the four-year tittle-tattle about the real score between the Songbird and the Songwriter.

8. THE SAM MILBY-PIOLO PASCUAL "DATE," ACCORDING TO LOLIT SOLIS

Last October 15, 2007, entertainment columnist and talent manager Lolit Solis dropped a bomb that rocked Tinseltown like an earthquake. The front-page headline of her column in Pilipino Star Ngayon,"Piolo at Sam, naglalampungan!" was earth-shaking.

Sam Milby and Piolo Pascual are considered the hottest male celebrities today. They're both handsome bachelors, both part of a variety show, and some people noticed their "closeness."

The Impact. The "date" story set off a media frenzy. It also became the conversation piece in showbiz circles, office chats, net forums, and even the chikahan in sari-sari stores.

Different camps entered the scene-Sam's manager Erick Raymundo said his ward was in a "salon"; the brand manager of Timex, a watch Piolo endorses, said their talent was having a pictorial during the time cited by Lolit.

Just before Christmas, the columnist-host-manager suggested her intention to make peace with the two Kapamilya stars, and Piolo was quite receptive about the possibility of settlement. But up to this day, the libel suit is still blinking "on."

Hot Topic Meter. One, the poolside scene was elevated to the showbiz battlefront, then the court room. Two, the issue prompted the Kapamilya and Kapuso supporters to declare "war."

7. MILYONARYO NO MORE WITH "WILYONARYO"

Game shows in the one-million-peso-prize league always sell. Besides entertainment value, they give Pinoys a chance-no matter how slim-to become millionaires.

But what happens if one game portion is reportedly "rigged?" It becomes a national issue.

This was how PEP described the incident: "On August 20, during the "Wilyonaryo" segment of Wowowee, Willie pulled up the winning film. This was supposed to contain the P2 million jackpot prize. When he did, the camera showed that a "0," or a zero, rested in the slot. In the background, co-host Mariel Rodriguez was heard to say, "Ahh, 'yon, walang laman!" (With a zero occupying the slot, this would mean there was no "2" anywhere among the slots.) To make matters worse, in Willie's hand was the film containing the number "2." (This would imply that the host could determine when and who to grant the jackpot prize.)"

The Impact. Joey de Leon, one of the main hosts of the longest running noontime show Eat Bulaga, didn't take the news lightly. Last August 28, he wrote in his column in a national broadsheet: "Teasing is not bad...cheating is."


That sparked a three-week-long word war between the two hosts, with millions of viewers watching the exchange. The MTRCB (Movie and Television review and Classification Board) had to intervene and stop them. The senate and DTI (Department of Trade and Industry) had to conduct a probe.

The segment was eventually cancelled, but so many questions are still unanswered to date. Last December 18, it surfaced again via a video showing the alleged "rigging" plan.

And three months later, Joey and Willie have not yet patched things up. There was an attempt for reconciliation, but so many ill things had been said, rendering all peacemaking efforts futile.

Hot Topic Meter. But more than the word war, the "Wilyonaryo mishap" painted a somewhat dubious scenario about game shows. Can they actually rig the results? Can they actually choose to make a contestant miss the jackpot? If the answer is yes, then this topic is bound to have a sequel.

And let's not forget that this issue also escalated into a network war, with the Kapamilya and Kapuso fans having their own heated exchange in the net forums.

"Someone very dear to me had to sit me down and really tell me straight to my face na: ‘Your husband is fooling around. He's been going out with this Katrina girl, who is now in New York. She's been studying in New York. That's why when you were here in New York, he probably left you for a couple of days. And it's been going on for almost a year now. I'm telling you this because I'm so naaawa na with you, because you're the only one who doesn't know,'" an excerpt from Pops's 16-page interview in the October issue of YES! magazine.

The revelation was prompted by an incident that involved Pops's boys, Ram and Robin. Martin's partner Katrina Ojeda reportedly called Robin and Ram "monkeys." It happened years ago but Pops learned about it only last July.

Hearing the lengthy details of the Concert Queen's breakup with Martin Nievera had the people rushing to the newsstands to grab a copy of the said magazine.

The Impact. Martin's initial reaction via a taped interview with Startalk was, "I think the best reaction is not to have one."

But in the weeks and months that followed, the Concert King couldn't stop himself from talking. "I don't know what good the article had done for her because it's done me no good. I'd like to apologize to the family she included in this article, meaning Katrina's family. She made Katrina look very bad. She made the Mom of Katrina and the family looked really bad," he said in another interview with The Buzz last October 7.

A reliable source told PEP that he even consulted a lawyer about his legal options.

The revelation also cut the communication between the former couple. And even worse, it put an end to the Pops-Martin tandem.

"The Martin and Pops team as we've known it, as we've lined-up and lined to watch it, before, during and after the marriage, it's over. It's dead," mentioned Martin in the same interview with ABS-CBN's showbiz talk show every Sunday.

Hot Topic Meter. The entire hubbub had the people talking for almost five months-from the time the "m" word reached Pops to the moment she reminisced 25 years of her career in showbiz at the Big Dome.

Is there room for reconciliation? Are they going to share the same stage again in the future? The issue may yet have another upshot.