Camille Prats will be a mommy come January 2008 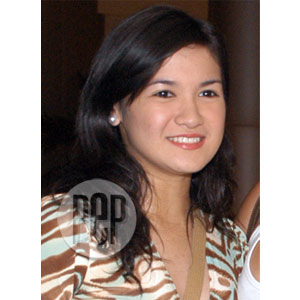 Temporarily holed up in America, young actress Camille Prats was so ecstatic when her family paid her a visit recently. Camille is currently eight months pregnant, courtesy of non-showbiz boyfriend Anthony Linsangan.

Former child star Camille Prats just can't wait to give birth and be a mother.

Camille, who is now eight months pregnant, revealed to Showbiz Central in a phone interview aired yesterday, December 23, the changes she has to go through as a first-time expectant mom.

The doctors attending to Camille said that she's due to give birth presumably on the first or second week of January 2008.

DOMESTICATED. Camille's unexpected pregnancy forced her to settle temporarily in the United States while waiting for her date with the stork. Her non-showbiz boyfriend, Anthony Linsangan, who is a good family friend, flew there last November to accompany Camille.

The young actress's stay in the U.S. admittedly exposed her to the kind of life she never knew when she was still here in Manila. Living under her parents' wing, plus the fact that she's a celebrity, wouldn't allow conditions that are less than comfortable.

But Camille has learned to appreciate a normal lifestyle outside of celebrityhood.

Living under one roof also served as an on-the-job training of sorts for Camille and Anthony.

Camille also has nothing but good words to the father of her baby.

According to Camille, she and Anthony are talking about getting maried next year.