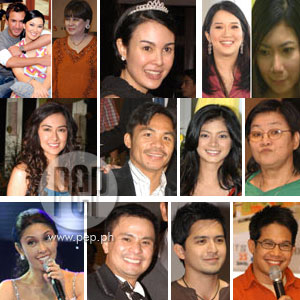 Some cried, others started a fight, a few made a revelation, there's one who kept mum, the rest did something extraordinaré—they are the scene stealers of 2007. Love 'em, hate 'em, but you can't ignore what they did this year!

Publicity, good or bad, does wonders to the career of celebrities. Some stars hire a publicist to make sure people keep talking about them. Others intentionally create a scene so the press would pick it up as news.

Still others turn into controversy magnets. Whatever they do, whatever they say—people pause, listen, and make a big deal out of it.

There are those who become the talk of the town but don’t necessarily want the publicity. Circumstances force them to react unexpectedly or impulsively, unmindful of the rolling camera or tape recorder.

PEP (Philippine Entertainment Portal) brings you its list of Scene Stealers 2007—the celebs who caught our attention and had us chasing the saga of their life through TV, the Internet, and print media.

The elusive Dennis Trillo became a hot item this year.