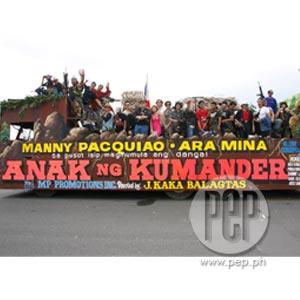 Even a world-renowned athlete like Manny Pacquiao has to face the sad consequence of his actions.

For failing to show up last December 24 at the annual Parade of Stars to signify the start of the 33rd Metro Manila Film Festival [MMFF] for 2007, Manny would most likely be held liable to pay the hefty penalty imposed by the MMFF board's ground rules.

As reported by PEP (Philippine Entertainment Portal) yesterday, December 25, the popular Pinoy boxer-turned-part-time actor was a no-show on the float of his movie entry, Anak ng Kumander.

According to Section XIV [Incentives and Penalties] of the Rules and Regulations of the MMFF, failure by a producer to provide a float as well as the absence of the lead actora/actresses and supporting performers during the parade will merit a penalty of P150,000.

According to the veteran director, Manny had a prior commitment, thus making it impossible for him to join leading lady Ara Mina, as well as the entire entourage for the special occasion. Direk Kaka, however, was quick to defend his lead star against possible negative comments about the apparent snub. He revealed that Manny called him through mobile phone while the parade was ongoing.

THE KISS. Aside from Manny, co-star Valerie Concepcion was also absent during the parade. But unlike Manny, the young star's decision to skip the event was already made known a week before December 24.

"Napag-usapan na rin kasi because of all the issue and everything, parang we decided na nga ganoon. My manager told me not to go na," Valerie revealed to PEP last December 12 at the taping of ABS-CBN's Christmas Special held at the Meralco Theater.

Valerie's action, as decided by her manager, Becky Aguila, had something to do with their reported fall out with Kaka after the director allegedly asked Valerie to have a "torrid" kissing scene with Manny—in complete violation of the agreement Becky supposedly had with the director concerning her ward's limitations.

To appease Becky, the "kiss" was reportedly deleted from the film's final edit. Direk Kaka defended the scene by saying that there's nothing offensive about it as the execution was done in great taste.

He also confirmed the news that Becky viewed the kissing scene as detrimental to Valerie's wholesome image, something that the director quickly botched.

So, was he slighted by Valerie's firm decision to miss the parade?