Kapamilya stars talk about the highlights of their career in 2007 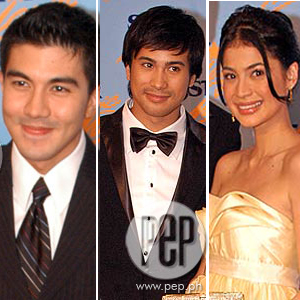 Kapamilya celebrities, like Luis Manzano, Sam Milby, and Anne Curtis (in photo), looked back at the flight of their respective careers this year and hoped to get more projects in 2008.

Before the year 2007 ends, PEP (Philippine Entertainment Portal) asked different celebrities about the highlights of their career this year and their expectations for the coming new year.

During the press conference of John Prats's newest endorsement, a scent line called Motion, he told PEP that his experience in Manay Po is one of his unforgettable moments in 2007. The dance icon played a gay character for the second time. But this was different because, according to him, it was his first to portray the role of a flamboyant gay. In the movie Ako Legal Wife: Mano Po 4, he was aFilipino-Chinese closet gay.

John said the pregnancy of his younger sister Camille was also unforgettable, not only for him but also for the whole Prats family. "Siyempre kasi, first, na-shock kami. Pero yun nga, at least kahit papaano naging okay lahat. Now everything is okay," said John.

Meanwhile, Rafael Rosel considers 2007 a good year because he bagged the Best Supporting Actor Award of Gawad Urian in September. The actor was also thankful for the projects that ABS-CBN gave him—Rounin and Prinsesa ng Banyera. "I'm really thankful talaga, at least may trabaho pa rin."

Rafael had actually thought of leaving the country if no projects were lined up for him.

He narrated, "Actually, I was planning to leave the Philippines for siguro a year or something. Hindi naman vacation, siguro explore life and see what other discoveries are in store for me. I'm planning to go to Egypt sana or Hawaii, Jamaica, or Amsterdam."

Luis Manzano, on the other hand, said, "I think 2007 was my busiest year. Ngayon ko na-feel yung buwan ka na walang tulog, so the whole year in general."

The Kapamilya star has been busy with hosting ASAP '07 and working as a VJ in MYX Channel. He was also part of Crazy For You and Rounin, and alsostarredin the hit comedy film, Ang Cute ng Ina Mo, with Anne Curtis.

With his hectic schedule, Luis could only wish for "work and rest at the same time" in 2008. He explained, "Alam ko mahirap, 'ika nga, 'when it rains, it pours,' sobra-sobra. Pero, still, I hope to find that balance talaga between, you know, happy with work at the same time having enough time to rest."

Fir his part, Sam Milby is also grateful for the blessings he received this year. He said Maging Sino Ka Man was the biggest highlight of his career this year, especially now that they're doing its second installment.

With the continued success of his career, Sam hopes that, "Sana nandito pa rin ako sa showbiz [next year]." He added, "Ito ang pinakagusto kong trabaho. I love my job, I love what I do, even singing. Sana I just improve [in acting and singing] and more projects. I just really enjoy what I do."

Other celebrities who thought they had a good year in 2007 were Kristine Hermosa for Prinsesa ng Banyera and Rounin, Toni Gonzaga for Pinoy Big Brother and Maging Sino Ka Man Book Two; and Anne Curtis, also for Maging Sino Ka Man. These young actresses also wished for the same thing in 2008—better and more challenging projects.