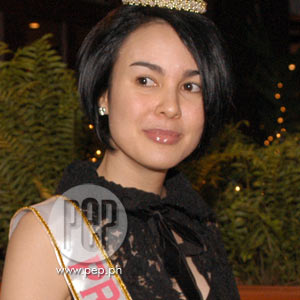 Gretchen Barretto left for the United States yesterday, December 26, together with her partner, businessman Tonyboy Cojuangco, and their daughter Dominique. Tonyboy will be having a medical check-up in the U.S. He had a throat operation in the middle of 2007.

"Ganito ba ang hiwalay?" Gretchen said as she laughed off rumors of her alleged separation from Tonyboy.

Gretchen was involved in so many issues this year. The "kisscandal' involving her and John Estrada was the biggest scandal she got involved in. According to Gretchen, she has already moved on after that incident.

She also shared to the reporters gathered at the Centennial airport departure area that she spent this Christmas with her sisters Marjorie and Claudine. The three had a falling apart for quite some time before they reconciled April this year.

"Ang sarap. Parang na-miss ko ‘yon. For me, that was one of the gift na nakuha ko this Christmas," remarked Gretchen.

By 2008, Gretchen expects to release her 12-song album. She admits, though, that this is the only concession Tonyboy has given her regarding any showbiz commitments.