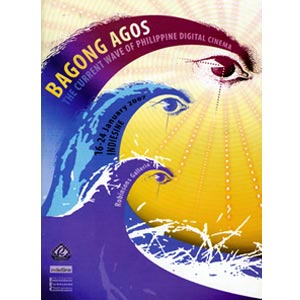 
In the past, independent filmmakers could only hope to screen their works in limited venues and occasional film festivals either here or abroad. In January 2007, however, a special venue exclusively dedicated to indie films was formally opened to the public—ushering in a new era in Philippine cinema.

Launching IndieSine was an ambitious project, to say the least. This collaboration between the Philippine Independent Filmmakers' Multi-purpose Cooperative (IFC) and Robinsons Galleria Movieworld promised a steady supply of indie films for the growing number of Filipino audiences who appreciate the obras created by local filmmakers.

To kick off the grand project, the Bagong Agos Film Festival and Daluyan Awards Night were held at the IndieSine, Robinsons Galleria, from January 16-24, 2007.

According to the IFC, the Daluyan Awards are "given to personalities whose body of work has become a constant source of influence and whose lifelong efforts in promoting, inspiring, and educating filmmakers and the audience are crucial to the development of the Independent Movement. They are the Daluyan of our humble vessels."

The first batch of Daluyan Award recipients were 11 progressive leaders and pioneers in the independent film community. They were honored during the awards night held at the IndieSine of Robinsons Galleria on January 16, 2007.

The only woman in the batch was Virgie Moreno, who is credited for paving the way for the founding of the University of the Philippines Film Center. The other awardees were Ben Pinga, pioneer of the documentary movement in the 1960s; Raymond Red, who brought honor to the Philippines by winning the Palme D'Or award in the Cannes Film Festival for his short film Anino; Surf Reyes, the first director of the Mowelfund Film Institute; and Kidlat Tahimik, who actively advocates the use of digital technology to preserve our Philippine heritage.

Since then, IndieSine has served as an alternative venue for moviegoers who seek alternative entertainment outside the mainstream movie industry. IndieSine has served as a hotspot for the new breed of filmmakers striving to carve a name for themselves in an industry that has seen a resurgence in recent years. Its unique programming offers an interesting mix of various alternative films, new and old, experimental and genre-busting projects, multi-awarded and obscure.

IndieSine has become a hubhub for the indie circuit—it is not only a venue for screenings but also a venue for intellectual discussion about the future of the indie film industry.

Philippine Entertainment Portal (PEP) has been regularly featuring films screened in IndieSine in the hope that Filipino moviegoers will support these pioneering gems that veer away from formulaic plots and from banking only on the popularity of the lead stars.

In 2008, we can expect brighter things from IndieSine as several new offerings are lined up for the first quarter of the year. These include Jade Castro's 2007 Cinemalaya entry about contractual workers, Endo; Jun Lana's film tackling the phenomenon of sex videos, Roxxxanne; Dianne Combalicer-Crisaldo Pablo's Retaso, a film onwomen's empowerment; and Ellen Ramos-Paolo Villaluna's film on freedom and homosexual relationships, Selda.