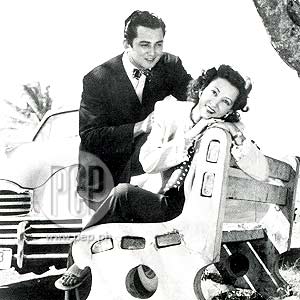 Rogelio dela Rosa and Carmen Rosales, the original King and Queen of Philippine Movies in the 1949 film Kampanang Ginto.

The year was 1898. Flickering images onscreen depicted a carruaje, or horse-drawn carriage, the horse trotting down the cobbled streets of Escolta. Wide-eyed women wearing traditional sayas and men in camisa chino stared at you from the screen, apparently awed by the movie camera.

That silent film was titled Escolta, one of the very first shorts documenting Philippines scenes during the turn of the last century. Besides that street scene were other shorts—vignettes of a carabao parade, the Pasig river, and other interesting shots of the era.

The documentary is simplistic by today's technological standards. The camera remains at a fixed angle, no close-ups, not even film editing.

In the early years of Philippine cinema, American production companies produced movies but the talents they employed were mostly Filipinos. It was only in 1917 that the first Filipino film company was founded by Jose Nepomuceno, and his brother Jesus. The film outfit was called Malayan Movies.

The company's first movie was the zarzuela Dalagang Bukid, written by Hermogenes Ilagan and starring Atang dela Rama and Marcelino Ilagan, which was shown at the Empire Theater in 1919. The silent film was "dubbed" by the actors reciting the dialogues and singing onstage in sync with the images onscreen.

In 1933, Filipinos got a taste of the first sound film with Punyal na Ginto, also by Jose Nepomuceno. Six years before that, American audiences got to hear their first ‘talkies' in the movie The Jazz Singer.

In the next few years, other film outfits sprang up: Parlatone Hispano-Filipino, X-Otic Films, Cervantina Filipina, Excelsior, LVN Pictures and Sampaguita Pictures. The investors saw that movies might prove to be a lucrative venture, seeing how the public adored the new form of entertainment.

But of the six movie companies, only two were able to survive until the Sixties—LVN Pictures under the leadership of Doña Narcisa de Leon, and Sampaguita Pictures led by the Dr. Jose Vera Perez and Mrs. Dolores Vera Perez.

Golden Years. The years 1934 to 1941 are deemed the first Golden Era of Philippine cinema. Moviemaking was seen as purely an entertainment art form designed to bring viewers a world of melodramas, musicals and romantic fantasies. Studios were patterned after Hollywood studios, which came up with two or three productions at the same time.

Movie stories were usually culled from comics and popular magazines, like Liwayway and Bulaklak. Box-office gains primarily determined a film's success, and whether the film stars had crowd-drawing power. Downtown Manila was the favorite location of movie houses, like Bellevue Cine in Paco and the Society Theater.

World War II. But the second World War ended the Golden Age of Filipino films as Japanes forces invaded the country. Everything had to go through the Japanese authorities, including films.

Despite the restrictions, director Gerry de Leon was able to make his outstanding film Tatlong Maria.

Post-war reconstruction to the '60s. After the war, the country slowly began rehabilitation and soon cinema houses would start their operations. In 1946, theaters featured the usual attractions from Hollywood.

At the same time, local actors, directors, and stagehands returned to filmmaking in earnest. The first film to be produced was Manuel Conde's Orasang Ginto under LVN Pictures. Most of the early postwar films were in the fantasy and adventure genres.

There were films of that period that until today are considered some of the best in Philippine Cinema—Manuel Conde's Genghis Khan, Lamberto Avellana's Anak-Dalita and Badjao, Gerardo de Leon's Sisa, Diego Silang, Tayug (Ang Bayang Api) and So Long, America.

The first award-giving body for Philippine movies was the Maria Clara Awards in 1950. Gerry de Leon won the Grand Prix (the equivalent of Best Picture) for his work on Satanas. The esteemed director won again the following year for Sisa.

Commercialism was the name of the game as the Sixties entered. The studio system—as in the previous decade when LVN Pictures and Sampaguita Pictures competed fiercely—saw contract stars building up their respective movie studios. The big stars appeared in movie after movie of the same genre and in the same romantic roles.

Quality films were still made during this period. Gerry de Leon translated the works of our national hero, Jose Rizal, to film Noli Me Tangere in 1961 and El Filibusterismo in 1962.

Red-hot Seventies. The early ‘70s saw the influx of bomba flicks—films sizzling with sex scenes, which the Board of Censors allowed, like Uhaw and Nympho. Producers banked on these films for quick-and-easy profit.

But this decade also saw the redemption of the movie industry in two directors of a different class: Lino Brocka and Ishmael Bernal.

Bernal made his directorial First with Pagdating sa Dulo in 1971. Film critics still consider Pagdating one of the best debut works of any director.

1976 also saw the formation of the Manunuri ng Pelikulang Pilipino, a group of local film critics. Every year, they hand out the Urian Awards to the films and performances adjudged the best.

And as the ‘80s entered, two women directors made breakthroughs with their noteworthy films, namely, Marilou Diaz Abaya with Brutal (1980) and Laurice Guillen with Salome (1981), both written by screenwriter Ricky Lee.

Film critics and other movie-industry observers consider the works of these highly creative directors, including veteran directors, especially in the '80s, the second Golden Age of Philippine cinema.

All these past decades generally saw the steady growth of Philippine cinema in terms of artistic expression and social relevance. Much of this progress can be attributed to the efforts of the producers, directors, and actors. That includes expanding our local movies' reach to international audiences. Credit also goes, of course, to the unfaltering support of Pinoy moviegoers.

Unfortunately, the ultra-commercialism of the Seventies set the decline of quality films in the '80s and '90s, affecting the very survival of the movie industry. In a forthcoming article, PEP (Philippine Entertainment Portal) will look at the state of Philippine cinema during tumultuous periods in our present-day history.

Reference for this article: Notes on the History of Philippine Cinema by Ed Cabagnot.