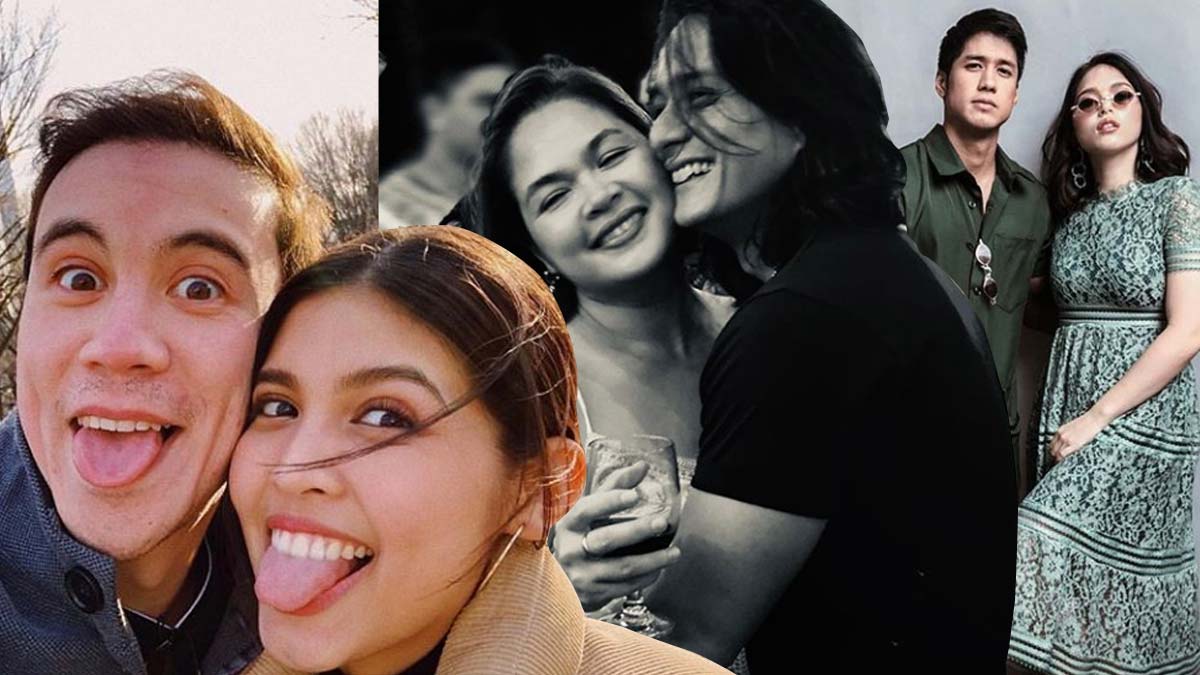 He is a star at ABS-CBN, she at GMA-7. Is that an issue? Nope, say Kapamilya-Kapuso couples Arjo Atayde and Maine Mendoza, Judy Ann Santos and Ryan Agoncillo, and Aljur Abrenica and Kylie Padilla.
PHOTO/S: @arjoatayde / @ryan_agoncillo / @kylienicolepadilla on Instagram

He is Kapamilya, she is Kapuso. Is that a problem? No, working in rival networks is not an issue with these celebrity couples.

The romance of Judy Ann and Ryan bloomed quietly on the set of the 2004 ABS-CBN fantasy series Krystala, their first project together.

And for years, they kept showbiz fans and media guessing about the status of their relationship up until April 28, 2009, when Judy Ann and Ryan tied the knot in a private ceremony at the San Juan de Nepomuceno church in San Juan, Batangas.

In the interim, Ryan transferred networks, and has been, for many years, a regular in the GMA-7 noontime show Eat Bulaga!

For her part, Judy Ann remains one of the top stars of the Kapamilya network, her work base from the time she was a child actress.

They have three kids: Yohan, Lucho, and Luna.

In 2018, the GMA-7 actress was paired with Coco Martin in the movie, Jack Em Popoy: The Puliscredibles, an entry in that year's Metro Manila Film Festival and Maine's first collaboration with an ABS-CBN actor.

Among the the film's cast members was Arjo, who was Coco's former co-star in the ABS-CBN series, FPJ's Ang Probinsyano.

While doing the movie, Maine Mendoza and Arjo Atayde were spotted together at a restaurant.

That got everyone talking, especially when the Kapuso actress and the Kapamilya actor continued to be seen together here and there.

In March 2019, Maine and Arjo finally confirmed that they've been dating.

They later revealed their anniversary date as a couple when they exchanged sweet Instagram messages on December 21, 2019.

Kylie and Aljur described their romance as "love at first sight."

Both GMA-7 talents back then, the stars met at a Wushu workshop in 2011.

They started dating that year, but the relationship seemingly ended in 2014.

The year 2017 turned out to be particularly eventful for the couple.

That was when Kylie and Aljur announced their engagement, and also revealed they were expecting their first child together.

Aljur had just transferred to ABS-CBN around that time.

A year later, the Kapuso actress and Kapamilya actor were married on December 11, 2018.

The couple welcomed their second son, Axl Romeo, on December 9, 2019.

The ABS-CBN actor and GMA-7 actress much prefer that they do not work in the same network.

The setup, they both agree, makes it easier for them to keep their work separate from their relationship.

Khalil and Gabbi met in 2015 at the debut party of Kapamilya star Julia Barretto, but their love story did not begin until two years later.

The Kapuso star got in touch with the Kapamilya talent via text message in 2017.

Later that year, they began dating. Three years later, Khalil and Gabbi celebrated the date she texted him.

Nash and Mika's love story was around 11 years in the making.

The young stars were still child talents under the Kapamilya network when they began to feel a strong connection with each other.

Mika's family, however, objected to the idea of her getting into a relationship at such a young age.

As they entered their teenage years, Nash and Mika went their separate ways.

Nash was groomed to be one of ABS-CBN's top network bets, while Mika moved to GMA-7 to focus on her own career.

A year after that, the Kapamilya and Kapuso young stars became an official couple.

Kean is the frontman of the band Callalily.

As a talent, he has been appearing mostly in ABS-CBN projects, such as the 2015 singing competition Your Face Sounds Familiar, the 2016 prime-time series Dolce Amore, and the ongoing music game show I Can See Your Voice.

Chynna has been a loyal talent of GMA-7 Network since 2001.

Kean and Chynna first met in 2003, but it was only in 2013 when their friendship began.

At that time, Kean was tapped to play Chynna's on-screen partner for an episode of Wagas, a GMA-7 drama-romance anthology program.

Their romance was fueled by their shared love for the arts and music.

Eventually, their love led to the birth of their daughter Stellar in 2016.

Three years after, Kean and Chynna welcomed their son Salem.

The Kapamilya and Kapuso artists first got married in 2015 via a civil ceremony. They later held a church wedding in 2017.

Showbiz fans have witnessed the love story of Jason and Melai since the seventh overall season of ABS-CBN's reality series Pinoy Big Brother in 2009.

They have been talents of the Kapamilya network for most of their careers, but Jason switched networks in 2017.

They have two girls: Mela and Amelia.

Suzi and Paolo met through the sports and lifestyle show Gameplan, an independently produced show by Probe Productions Inc.

Since then, Suzi and Paolo have become well-known television personalities.

Suzi is one of the hosts of the GMA-7 morning news show Unang Hirit.

Paolo is one of the lifestyle hosts under ANC, the ABS-CBN News Channel.

They have been married since 2001, and have three girls: Leona, Jade, and Nella.