Paula Peralejo and the joy of going back to school 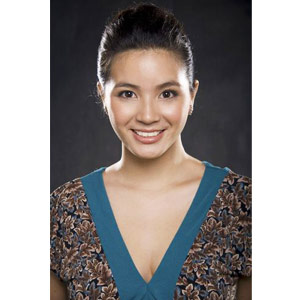 "I got bored with showbiz that's why I went back to school," Paula Peralejo candidly said about her life-changing decision.

Paula Peralejo never intended to join show business. Her elder sister Rica was part of the famed kiddie-teen show Ang TV and Paula just enjoyed watching her during tapings of the show.

One day the cast lacked some extras for the classroom scene. Rica's road manager Lulu Romero picked out Paula to change into a school uniform.

"I was basically, ‘kidnapped,'" Paula remarked over a lunch at a campus café in Quezon City.

It was only when her mom mentioned that she was getting paid from 300 to 500 pesos per episode that she agreed to join the show regularly.

"Going to showbiz was my excuse ‘coz I didn't want to go to school," she recalled when asked what enticed her to join show business.

Fast forward to 2008 and the 23-year-old Paula is proud that she is about to earn her Philosophy degree this coming summer from the University of the Philippines. Yearning to learn more, she plans to attend a seminar on Philosophy for Children in the U.S. this coming May.

SHOWBIZ WHIRL. Paula was eight years old when she joined the quintessential show, Ang TV. She enjoyed doing the show so much that she transferred to a school that could accommodate her busy schedule. She was able to balance school and showbiz up until she was in Grade 6.

But when the first day of high school came, Paula didn't find it to her liking.

From then on, she became part of ABS-CBN shows like Gimik, Home Along da Riles, MTB (Magandang Tanghali Bayan) and Tabing Ilog. She occasionally appeared as a guest performer in Maalala Mo Kaya and Ipaglaban Mo.

It was in Tabing Ilog that she met Trina Zuñiga, who was able to balance both school and show business. Trina told stories to Paula about school with a lot of enthusiasm.

"I got so inspired. She didn't stop school. So, I was like, ‘Astig naman'! Iba yung buhay niya. Parang sabi ko, ‘Oo nga, parang ang bobo ko na,'" she realized.

So, Paula decided to go back to school. She took the PEP Test [Philippine Educational Placement] to determine her academic aptitude for high school. A program of the Department of Education, PEPT measures one's level of knowledge and, based on the test results, grants official certification that enables the holder to enroll at a higher level of studies. She took the test thrice and was later able to enter college. She enrolled in Veterinary Medicine at De La Salle-Araneta in Caloocan in 2002.

COLLEGE LIFE. Initially, the petite actress was able to handle the pressure of balancing showbiz and school. But she decided that school was too important to miss out.

"So, after a while, ang dami ko nang absences, although mabait talaga yung prof ko. Ayoko yun. Ayoko yung bumalik ako ng school to get the artista treatment. No, I said, ‘I'm quitting.' If you can't release me on time always, and you're gonna mess up with my school schedule.

Paula spent two years in De La Salle-Araneta but later decided that Veterinary Medicine wasn't to her liking. She transferred to the University of the Philippines in 2004.

She says that she's enjoying her stay in the country's premier university.

But being known as a TV star, she became a target of envy.

Paula is also proud that her sister Rica was able to go back to school at the Ateneo de Manila, Loyola Heights, which is near U.P., Diliman.

She happily tells, "Masaya. Laging naiingit iyon for a time sa amin, ‘Ay! Lahat kayo nag-aaral.' I'm happy because she got into a good school. She's really learning a lot. Hindi naman niya talaga dream yung manalo talaga ng award or something. There are a lot of things that she wants to do and like yung writing. Mahilig siyang magsulat. It's good that she got into creative writing.

EXPLORING THE COUNTRY. Besides enriching her academic life this past few years, Paula is determined to travel around the Philippines. She has gone to different parts of the country exploring the spots, meeting people and getting scenic pictures as souvenirs of her travel.

She thanks her boyfriend who shares her enthusiasm in going around the country.

She also explains her being a vegetarian.

"Pero may deeper meaning yung reason ko, its environmental ethics. Pero you just say the easiest thing, ‘ you don't like animals being killed.' That's easiest thing. They'd laugh at you pero that's the easiest thing kasi you'd have to say all these things."

Paula credits her stint in showbiz for letting her know more of the world at large.

On that positive note about her showbiz experience, Paula Peralejo ended our afternoon chat.