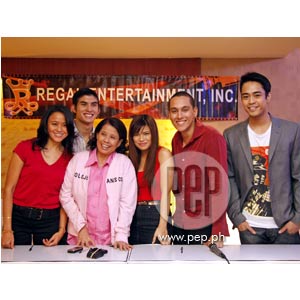 Young actors Carlos Ermita Alvarez, Denise Laurel, Eri Neeman, and Brent Javier made a promise to Regal Entertainment matriarch Lily Monteverde and daughter Roselle Monteverde-Teo after their contract signing last February 7: They will never be a headache to the two lady bosses.

"These are my angels," said the movie producer, describing her new talents. Mother Lily said that as Regal talents, these four young actors will have two to three projects" this year.

Standing beside her mother, Regal producer Roselle Monteverde-Teo talked about how Regal would project these new talents to the viewers.

Roselle also described how she felt about the newest batch of Regal babies. She said, "Excited kasi siyempre may kanya-kanyang look sila, they have their own characters na puwede talagang abangan."

Then, a reporter asked a message from Mother Lily for the four new talents. The Regal Matriarch said, "Welcome to the...," then pause for a while. The reporter suggested "family" but Mother Lily thought, "No, it is too formal."

In the end, Roselle told Denise, Eri, Brent, and Carlos, "Welcome to the craziness."