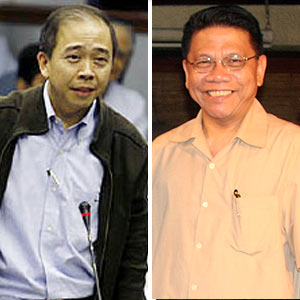 Rodolfo Noel "Jun" Lozada Jr. (left) said that GMA-7 news anchor and official Mike Enriquez (right) was expected to be in charge of his press conference where he was told to deny what he knew about the anomalous broadband network deal. The news anchor said that he was shocked to know that he is being implicated in the controversial ZTE deal.

Officials of GMA-7 sent a statement to PEP (Philippine Entertainment Portal) denying Mike Defensor's insinuations that the media can be managed ("tatrabahuhin") and that GMA-7 news anchor and senior vice president for radio Mike Enriquez is "in charge" of Rodolfo Lozada's press conference.

Star witness Rodolfo Noel "Jun" Lozada Jr. pointed out that holding a press conference to clear Malacañang of any wrongdoing in the overpricing and bribery scandal was actually former Department of Environment and Natural Resources Secretary Mike Defensor's idea. He revealed this during a Senate hearing to investigate the anomalous $329-million national broadband network deal between the Arroyo government and China's ZTE Corp.

Jun Lozada linked First Gentleman Jose Miguel "Mike" Arroyo and former Commission on Elections chairman Benjamin Abalos Sr. to the broadband deal mess. Lozada revealed that the contract cost was overpriced by at least $130 million, which would serve as kickback to Abalos, who was the project broker at that time.

The key witness used to be a consultant of former director general of the National Economic Development Authority Romulo Neri. Lozada often sat as representative of Neri in discussions on the broadband project. He said he quit as project consultant on January 18, 2007, after receiving threats from Abalos.

In his defense, former Environment Secretary Mike Defensor said that he merely suggested Mike Enriquez as a credible media personality who can be tapped to spread the word about Lozada's testimony.

An article published in gmanews.tv yesterday, February 10, contained Mike Defensor's apology to the offended TV host. "I'd like to apologize kina Mr. Mike Enriquez," Defensor said in an interview with GMA News. "I mentioned that in a good and positive sense na you [Lozada] talk to someone, kung ayaw mong magpa-presscon, to an individual with an unassailable reputation."

Here is the statement of GMA Network (RE: Insinuations of Mike Defensor), published in full:

"Neither Defensor nor anybody else outside of authorized GMA Network officials can order or commit any of our personnel for any assignment.

"Our only commitment is to the truth.

"Our track record of balanced, fair, objective and truthful reporting throughout the years, and through all administrations, speaks for itself.

"This is our commitment to the public. This is a commitment we intend to honor for all time—in the name of serbisyong totoo."