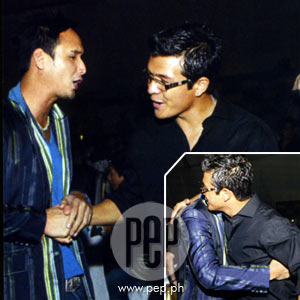 Jericho Rosales and John Estrada were two of the celebrity scene stealers during the YES! 7th anniversary and PEP (Philippine Entertainment Portal) grand launching last year. The two actors showed the media something positive to report to the public—a reconciliation.

On this same day last year, YES! magazine, which was actually celebrating its 7th anniversary, and PEP threw a magnificent party for the prominent personalities in showbiz. The event was attended by over 168 celebrity guests, including film and TV producers, directors, talent managers, scriptwriters, and network executives.

Even Manay Ethel Ramos, the dean of the entertainment press, was impressed by the number of celebrities who came to celebrate with YES! magazine and PEP. She said, "Mas marami pa kayong artista kesa mga awards nights."

With a gathering this huge, people expected a lot of things to happen. In fact, after the event, YES! and PEP were mentioned in several TV news reports and written about in showbiz columns, not because of the celebration itself but because of the scene stealers that night.

Now, PEP looks back to its grand launching last year and recalls the important happenings that hit the headlines after the party.

The rift between these two actresses started during their pictorial for a shampoo brand and for Preview magazine that happened in late 2006. According to reports, Dawn allegedly called her fellow actress a prima donna during their photo shoot.

Since YES! and PEP editor-in-chief Jo-Ann Maglipon knew about this, she made it sure that these two actresses would not be assigned to the same table.

Gretchen arrived with her friends Ruffa Gutierrez and Joyce Jimenez. Ruffa greeted her friend Dawn, but Gretchen apparently did not care to approach Dawn with any "Hi."

When showbiz reporters asked Gretchen if there was a chance she and Dawn would settle their issue that night, she confidently answered, "According to my Valentino gown, it's not gonna happen."

La Greta, popular nickname of Gretchen in showbiz, even argued that she already made a move before to patch things up with Dawn but nothing happened.

Until now these two actresses have not reconciled. Dawn chose to lie low in showbiz and focuses instead on being the First Lady of Davao del Norte District II Representative Anton Lagdameo.

Gretchen has been involved in different scandals after that issue with Dawn. She had a kiss scandal with actor John Estrada and recently she allegedly had an affair with Reynaldo "Dodi" Puno, executive director of Road User Tax Boards (RUTB); and another kiss scandal with Ricky Yabut, brother-in-law of Gretchen's life partner Tonyboy Cojuangco.

GIVE RESPECT. This is what Ara Mina wanted when Rhian Ramos allegedly ignored her while greeting Polo Ravales, Ara's former boyfriend who was having a conversation with the sexy actress when Rhian butted in.

PEP contributor Pilar Mateo described in her article: "While Ara and Polo were in a deep conversation, GMA-7 artist Rhian Ramos—Richard Gutierrez's leading lady in Captain Barbell and co-star in The Promise—suddenly arrived and greeted Polo. Rhian even touched Polo's semi-bald head after giving him a kiss on the cheek. Rhian talked to Polo without a word or a look at Ara who was beside the sexy actor."

When Rhian learned about Ara's reaction, she immediately apologized and said she did not intend to ignore her. In a taped interview with the defunct showbiz talk show S-Files, which was also written in PEP, Rhian said, "I really want to apologize, on behalf of the fans, sa naging reaction sa issue na 'to kasi honestly, Ara, you don't deserve that. I mean, I wouldn't want that to happen to my friend."

Polo, on the other hand, tried to downplay the incident. He even said that the two ladies knew each other during their pictorial for the defunct fantaserye Lupin. He explained, "Sa pictorial ng Lupin, binati 'ata ni Ara si Rhian, siya pa yata ang nauna para hindi mahiya si Rhian. At saka para if ever na magkita sila ulit, okay na."

Indeed, the two did not have a problem while they were working together for Lupin. In fact, there were no follow up stories concerning the two actresses after Rhian apologized to Ara.

"PEACE, BRO'." The happenings during the YES! and PEP party were not all bad. The showbiz reporters were able to get some good news during the night—thanks to actors John Estrada and Jericho Rosales who made the event more meaningful.

Jericho and John once engaged in a shouting match that almost turned into a fist fight during the celebrity premiere of Superman Returns at IMAX Theater, SM Mall of Asia, in Pasay City. Echo reportedly confronted John because he allegedly tried to "take home" his girlfriend Heart Evangelista after a party.

When people saw Jericho and John at the PEP party, some speculated that they would either snub each other or there would be tension between them. But they were wrong.

While making rounds at each table, Echo approached John and offered a handshake. After that, the two gave each other a brotherly hug, a sign that the rift between them was settled.

In an article written in PEP, John told the press he was happy that he and Echo were finally okay. "All's well that ends well," said John. "Tapos na ‘yon, so huwag na nating lagyan ng kulay. I wish them the best at sana silang dalawa [Echo and Heart] na talaga!"

Aside from these three major incidents, there were also other celebrities who stole the people's ear from the performing band during that night.

One of these were former lovers LJ Reyes and Alfred Vargas who came to the event separately. At that time, the two lovers were in "cool-off" mode. LJ allegedly found out that he was sending text messages to his former Malaysian leading lady, Carrie Lee, in the afternoon soap opera titled Muli.

Bernard Palanca, who gained a little weight compared to the YES! party in 2006, also got the attention of the media when he came sans his wife Meryll Soriano. Soon after Meryll and Bernard got married, he got her pregnant. And while still carrying their baby, Meryll admitted that she and her husband had already broken up.

The YES! and PEP celebration showed what exactly is happens inside showbiz. As YES! described it, "May nag-recon, may nagdedmahan, may nagkabalikan, may nagkalinawan, may okrayan..."