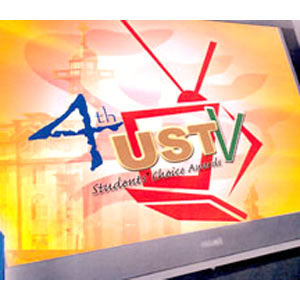 More importantly, Studio 23 was honored as the country's Most Responsible Youth-Oriented TV Station.

The long-running Bubble Gang was adjudged Most Popular Gag Show while Slam Dunk was the Students' Choice of Full Animated Program.

The high-rating Marimar was chosen as Most Popular Drama Series while its two lead stars, Marian Rivera and Dingdong Dantes, were named Most Popular Actress and Actor in a Drama/Miniseries.

The 4th USTv Students' Choice Awards is organized by the Office of the Secretary General in cooperation with the Office for Student Affairs, Central Student Council, the Student Organizations Coordinating Council, the Office of Public Affairs, the Social Research Center, the Institute of Religion, Educational Technology Center and other related offices.