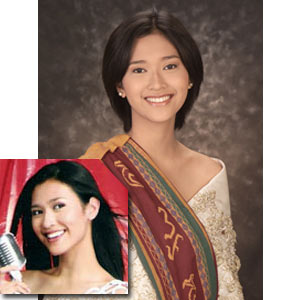 Anna Theresa Licaros (main photo and inset) is an embodiment of brains of beauty. As Bb. Pilipinas-Universe 2007, she became the seventh Filipina to win the Miss Photogenic award in the Miss Universe pageant in Mexico.

Filipinos place a high premium on education. Being able to graduate from a reputable school is deemed an achievement not only for the student but also for the parents who worked hard for the tuition of their child.

Every June, millions of students hold their first day of classes to embark on another school year filled with lessons, quizzes, and of course, grades. It isn't easy being a student, especially in this 21st century—the Information Age. Now, more than ever, knowledge is power and a solid academic foundation is a treasure that will yield dividends for years to come.

Yet for most of our local stars, attending school regularly is out of the question because of their hectic taping schedules, numerous guestings, and even out-of-town shows. Earning a college degree is hardly an option for them while caught up in the demands of entertainment.

And so it is that showbiz personalities who took time and effort to finish their studies—with excellence, to boot—surely deserve recognition. PEP (Philippine Entertainment Portal) raises them up as role models for today's youth.

Some of these names were excellent students even before they became public figures. Others excelled as they juggled their showbiz commitments and their studies. Some of them show promise as they complete their secondary education; others finished college with honors.

Here, in alphabetical order, are the outstanding stars who prove that showbiz and academics can go together:

Bb. Pilipinas-Universe 2001 Zorayda Ruth Andam is a Filipino lawyer, beauty queen and television host. She was named 1st Runner-up in the Best National Costume category in 2001, when she competed in Puerto Rico wearing a traditional Maria Clara costume while holding a dainty parasol.

The former beauty queen hosted the television show Good Take, which aired on IBC-13. Zorayda co-authored a book called E-Primer: An Introduction to E-Commerce, which was instrumental in the enactment of the Philippines E-Commerce Law. She is now connected with the ACCRA Law Firm.

Former TV host Christine Bersola-Babao has a long history of academic excellence. Before she became known for being the perky host of ABS-CBN's Magandang Umaga Bayan (later re-titled Magandang Umaga Pilipinas), she graduated valedictorian from OB Montessori Greenhills. During her high school days in Assumption College Makati, Tintin was given an Excellence Award for Community Involvement. She was recognized for her charity work among the poor communities as a member of the Assumption.

Fresh out of college, Tintin started out as the Weather Girl in ABS-CBN's TV Patrol until she became TV Patrol's Star News anchor. During this time, Tintin became close to her fellow TV host Julius Babao. They tied the knot in December 2003 and have been blessed with a daughter whom they named Antonia.

The female showbiz personality is now an accomplished author. She has published three children's books: Bryan Learns His Lesson, Basura Monster, and The Story of Christine.

Dubbed as the Kilabot na Valedictorian during his Pinoy Big Brother Teen Edition days, Aldred Gatchalian has remained as humble as ever. The young boy from Pasay graduated at the top of his class in St. Theresa de Avila School in Parañaque.

However, the young boy had difficulty socializing with his housemates and opted for a voluntary exit in PBB Teen Edition. Since then, he has appeared in TV shows such as Love Spell, Abt Ur Luv, and Ysabella. He is also part of the Toni Gonzaga-Sam Milby starrer My Big Love, which is being shown in cinemas nationwide.

His interpretation of the song "Kapag Ako'y Nagmahal" has been chosen as the theme song of Your Song, which premieres on March 2. The mini-series features the love team of Maja Salvador and Rayver Cruz, as well as young stars Valeen Montenegro and Victor Basa.

Aldred is now enrolled in the UP Open University for an Associate in Arts.

Commercial model Nicole Hernandez is a dean's lister at De La Salle University (DLSU) where she graduated as a double-degree holder in Psychology and Business Management. Nicole became a familiar face because of her endorsements for Astring-O-Sol and Ponds, with its memorable line "Carla Grasa!" She also joined the group of zesty Pepsi Ambassadors, along with TV actor Jericho Rosales.

In an interview, Nicole reminisced about her school days: "Psych was a blast. The training was beneficial. It involved wide reading and research. We were actually acknowledged by the mentor as having an organized thesis." (Manila Standard Today, January 2006)

"Business Management was harder, since we had Law and Accounting," explained Nicole. "For our thesis, we sold sport shorts for women. I became the corporate secretary and production manager."

Mikee Lee, a former housemate of Pinoy Big Brother Teen Edition, would rather talk about his scholastic achievements than his failed relationship with ex-girlfriend Isabel Blaesi. At the Ateneo de Manila University (ADMU), the young teenager is a member of the Math team as well as a member of Ateneo's debate team. When Mikee took the National Career Assessment Exam (formerly the National College Entrance Examination), he got 99 percentile score. As for the Scholastic Aptitude Test for the U.S., he got 97 percent.

He also takes pride in the fact that he was included in the top two percent of all applicants who took the Ateneo college exam. "It's called the Director's List, the top two-percent examiners. Magpapa-dinner pa nga raw sila for all those na nakapasok sa Director's List. Astig!" said Mikee during his PEP interview (February 3, 2008).

Mikee is part of the ABS-CBN teen show Astigs and he currently hosts Y Speak.


Anna Theresa Licaros was discovered in a most unlikely place—she caught the eye of a talent agent while she was standing in a queue during registration week in law school. She was convinced to go for a VTR and her agent suggested that she should join the Bb. Pilipinas beauty pageant.

Anna Theresa did sign up for the contest and eventually captured the title, Bb. Pilipinas-Universe 2007. She represented the Philippines in the Miss Universe pageant held in Mexico where she bagged the Miss Photogenic special award via a worldwide Internet voting poll. She is the seventh Filipina to have won the special award.

In August 2007, she joined GMA-7's reality singing competition Celebrity Duets but didn't make it to the grand finals.

Ms. Licaros is truly the embodiment of a Filipina blessed with brains and beauty.

"So I think nag-excel lang ako because they [her professors in IAME] were really impressed sa last project na in-implement ko," added Melanie. "It only took me two weeks to present a very successful project in Rockwell where we touched my major, ‘yung accounting and financing, saka advertising."

Melanie took some business modules offered by Warnborough University in New England through IAME. Aside from finishing this course, she co-authored the book Beauty Reborn: the New Placenta No-Nonsense Beauty Guide with experts Jim Acosta and Dr. Dietmar Rummel.

Not many people know that stand-up comedian Giselle Sanchez had to earn money at a young age in order to keep studying at the privately funded Poveda Learning Center. Her parents told the principal that Giselle could no longer study in Poveda due to financial problems in their family business. Poveda valued Giselle as an asset due to her high grades and exceptional talent, and so, gave her a scholarship till she finished high school.

Giselle earned money for her allowance by selling snacks from classroom to classroom. Now she shows her gratitude by hosting fund-raising dinner shows for the benefit of scholars of the Giselle Sanchez Foundation.

"This high-quality education enabled me to enroll in the college of my choice [UP] and eventually I used what I learned in my job. Now I want others to have an equal opportunity for education even if they are not financially capable and I want to pay the goodness forward," explained Giselle during her interview with the Manila Bulletin (May 2007).

Iya Villania was born and raised in Australia but both her parents are of Filipino descent. By age 13, she fronted for Filipino artists such as Pops Fernandez, Martin Nievera, the APO Hiking Society and Jaya when they performed in the Land Down Under.

Raelene Elaine Villania continued her secondary studies at the Colegio de San Agustin in Makati and graduated on March 2004. She continued her education by taking up AB Psychology at the De La Salle University where, despite her busy schedule, she managed to become a consistent dean's lister.

"The reason I took up AB Psych in De La Salle University is because if ever I can become a full-time student again, and I really want to take up Law or Medicine, I can always shift to BS. I'd like to be a doctor, or maybe anything that has to do with helping people," Iya admitted in her interview with Valerie Tort.

Iya is also a host of ASAP '08 and Studio 23's weekly lifestyle show Us Girls. She also helmed the celebrity dance show U Can Dance with co-host Derek Ramsey.


We're sure you know of other stars who have excelled academically. Feel free to add them in the comments section below.