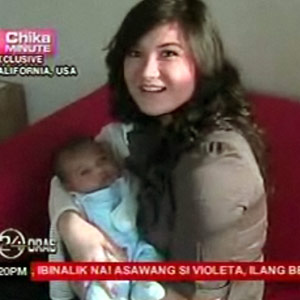 Former child star and now doting mom to baby Nathan, Camille Prats is excited to return home to the Philippines to continue her showbiz career and also to finally walk down the aisle with hubby Anthony Linsangan.

Shedding some of the weight she gained during her pregnancy, Camille revealed to GMA-7 in an exclusive taped interview from Los Angeles, California, some details about her impending return to the Philippines.

Camille made known her plans to resume her shelved showbiz career. But other than work related matters, the former child star and her husband Anthony Linsangan are determined to push through with their church wedding before 2008 ends.

"Inaayos na namin," revealed Camille. " Actually, pag-uwi namin aasikasuhin na namin. We have a date already, we have a venue, ‘yong church inaasikaso pa namin. Pero for sure, by the end of this year mangyayari ‘yong church wedding."

Camille and Anthony tied the knot last January 5, 2008 in Los Angeles, California. It was a simple civil ceremony witnessed by immediate family members. A few weeks after, she gave birth to Nathaniel.

Having gone through the rigors and pains of pregnancy, Camille gave StarStruck luminary Jennylyn Mercado a piece of advice on how to deal with her current predicament.

Jennylyn, as we all know, is currently pregnant courtesy of ex-boyfriend Patrick Garcia. Jen's delicate condition combined with her difficult relationship with Patrick has obviously taken its toll on the young actress, aggravating her situation even more.

"Jen, ano lang, just take it easy kasi ‘yong hormones niyan grabe," said Camille. Citing from personal experience, she continued: "Kasi when I was pregnant nung first three months ko, ayokong nakikita si Anthony. Ayoko siyang nakakausap, I don't want to hear his voice, I don't want to talk to him, that time. Pero isipin mo lang na don't indulge too much to those emotions because it's just your hormones," she ended.

Camille and Jennylyn worked together before in the GMA-7 fantaserye Super Twins.