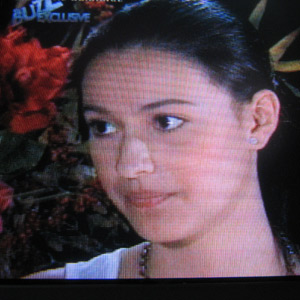 "Sobrang sad po ako. Kasi I was in Brazil, so I couldn't do anything about it. I couldn't even defend myself," lahad ni Mariana.

"And I was like, ‘Please help me out. Help me to clean this thing,'" dugtong niya.

"Last September, I went to Bohol to visit with my friends. And I just arrived from the airport and he [Cesar] asked my friend if I was a model. Well, if I wanted to join in a movie. He was always talking to my friend and my friend was the one talking to me.

"I was surprised, so I didn't answer anything at the moment. So he asked us to join him to merienda at his house sa Bohol. ‘Tapos, we all went there and all of my friends. We had merienda. He's talking what he was expecting for a movie. What he want in my role and stuffs like that. And I was like, 'Okay, I got to think about it before answering now,'" kuwento ni Mariana.

"I always wanted to be an actress, so when he came, I thought that's a good opportunity," sabi ng Brazilian model.

"No," mabilis na tugon ni Mariana. "My friend told me. She said he's an actor. He's like a respected actor here in the Philippines. And then I just told my friends what they thought about it, they said it's okey because he's like a good actor."

"For like a few days and then we got back to Manila. Then, he asked me to go to do the parang test video. He wanted me to see how do I look in the camera. I went with my friends always. And then he [Cesar] gave me parang script. I memorized some lines and then they just parang shot it," lahad ni Mariana.

"Maybe...bandang Bulacan. We met and then he brought me and my friend there. So I didn't ask where I was. Actually, I don't remember the name."

"He said like it was good," sagot ng teenager.

"He wanted me to meet the director of the movie. To show me to the director, what he thinks about me. So we went to his restaurant sa Tomas Morato," kuwento niya.

"He gave me the script with all my lines."

"When I was about to leave to Brazil, he asked me to go to introduce me to some people from the movie. Also, from the guy who wrote the script," lahad ni Mariana.

"I met her personally once sa Rockwell," kuwento niya. "I was just with my friend. I went there to watch movie and they were there with Cesar and another friend of them, and then he introduced me to her. She was nice."

"I told her that I met him in the airport and ask me to do a movie with him. He offered me three movies. I explained her everything and then after we put down the phone. I texted her explaining again everything that really happened and asking her if it was clear. If she was okay with that. She said all good, okay, thank you, and I pretty thought she was okay."

"I want because it's something that I wanted since I was a kid. To be an actress, good actress. I want to learn and to be a good actress," pahayag niya.

"I'm affected but I have to handle it," sagot ni Mariana. "That's why I'm back. Back to show people that I didn't do anything. I want them to understand what really happened and Sunshine too because I don't know if she really thinks that something happened."

"I hope they get together and be really happy because I didn't cause anything and I really hope that they get happy together."

Para kay Cesar, "Get back to Sunshine and be happy."