Lea and Robbie: A Wedding Fit for a Diva 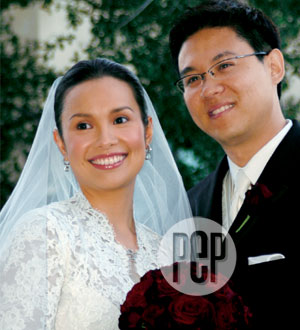 Chinese-American businessman Robert "Robbie" Chien was not entirely aware of her fame the first time he met the award-winning star of Miss Saigon. All he knew was that she was the singing voice of Jasmine in the Disney Movie Alladin.Robbie and Leagot married on January 10, three years after their first meeting,at the Cathedral of Our Lady of Angels, Los Angeles, California.

On the day of her wedding, Lea Salonga woke up at 7:30, refreshed and giddy after only five hours of sleep. She had a light breakfast and a quick shower. And then it was time to get ready. Stylist Juan Sarte had worked on her a number of times before, and today he worked his magic on her as well, so that she didn't look too made up, but not too normal either. He enhanced the natural radiance every bride has on her wedding day.

Lea's hair was pulled back the way it usually is for her performances, but this time it was twisted up into a little braid knotted around the actual bun, held in place by crystal hairpins.

Designer Monique Lhuillier, whose sumptuous dresses already grace the pages of virtually every bridal magazine in the U.S. was making a dress for a Filipino client for the first time. She had first met Lea to brainstorm about the dress over a year ago, and it took five months to finish the actual dress. It was hard work, but this was her Philippine debut, and she was pleased.

To stick to the wedding traditions, Lea wore something old, something new, and something borrowed.

Something old: Lea was wearing a garnet-and-diamond ring that belonged to Beverly Jean Chien, mother of bride-groom Robbie Chien. Lea says Robbie's mom was wearing it on the day she died last year.

Something new: her gown and shoes.

Something borrowed: her earrings from Diagem at Shangri-La Makati.

Something blue... ssshhh: her baby-blue undies, a present from bridesmaid Christine Yasunaga, who first introduced her to Robbie over two years ago.

Then Lea was off to the church in a white stretch limo. The wedding wasn't to start till 3 p.m. While many brides are fashionably late, getting to the church way after guests arrive, Lea was there before 2 p.m., earlier than the bridesmaids and just any of the guests.

Lea went straight to the bride's room downstairs. It was cold and stark, with just stairs, and a table. There was a bouquet of large red roses in one corner—from Robbie. There was a little present, too. Excitedly, Lea ripped open the package. It was a pendant with three little hearts of diamond. "Oh!" she gasped. "I love it!"

Monique had earlier suggested she not wear any jewelry so as not to detract from the drama of the lace top. But Lea put on the pendant anyway. She wanted to, it was a present from Robbie.

She took the card from the flowers and read it, a big smile on her face, her eyes alight. "To my wife-to be... Of all the hearts in the world, I'm glad I found yours."

A bit past two, Victor Lirio, main wedding coordinator and Lea's honor attendant arrived. "Have you seen Robbie yet?" She asked them. "How is he?"

Robbie had been feverish earlier that morning. Apparently, he was much more nervous than she was.

Lea asked everyone to gather in a circle, and she led a prayer of thanksgiving, thanking Him for Robbie, for the gift of friendship in the circle of women, for the perfect day.

One by one, the bridesmaids walked down the long aisle of the Cathedral of Our Lady of the Angels. Then Lea, accompanied by her mother Ligaya and her brother Gerard, walked down the aisle, all calm, collected, and poised, smiling and radiant.

Till she saw Robbie burst into tears, and take off his glasses to wipe the tears off his face.

That was when she burst into tears herself, her nose crinkling and her lips quivering.

The tears started again when Fr. Brian Castañeda mentioned that the ceremony was also dedicated to the memory of Robbie's mother, who passed away in July.

Robbie was Beverly's only child, and she had raised him pretty much on her own after she and his father Robert divorced. Beverly was Robbie's whole world before Lea, that was why the whole clan was happy in the knowledge that, with Beverly gone, he still had Lea.

Perhaps that was going through Robbie's mind when he said his vows. He barely said his name when his voice broke again. The rest of the guests ended up just as choked up as he was, as they watched him slowly manage to get the words out.

Then Lea took center stage, surprising him by singing her vows "Two words" (music by Louie Ocampo and lyrics by Freddie Santos), accompanied by her brother Gerard on the piano, and Gerard's fiancée, Divina Juanita "DJ" Franciso, on the violin.

This time, Robbie was composed and confident. He and his new bride surprised everyone by singing ""With You I'm Born Again."

Best man Eric started off the champagne toasts, reminiscing about the time Robbie had him eat ice cream with chopsticks, and the first time he ever met Lea. He had been expecting a glamorous diva. Instead he met a young girl in ripped jeans and sneakers.

Finally, it was time to dance the night away. Robbie danced with Lea's mom, and Lea danced with Robbie's dad, to "It's a Wonderful World."

Two years after, except for the arrival of their firstborn Nicole, nothing much has changed. Robbie and Lea are still dancing to the tune of "It's a Wonderful World."