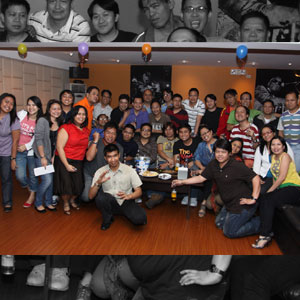 When they're not busy interviewing, writing, or uploading stories for PEP (Philippine Entertainment Portal), they take one night off to chill out and say, "cheeeeeze!" The annual get-together of contributors and staff members took place at Sala Room of Centerstage, Jupiter Place, Makati City. Special thanks to Cherie watches, Robinsons Appliances, and Panasonic Lumix.

There was neither a press conference nor showbiz event, but a number of showbiz columnists and writers were spotted entering the spacious Sala Room of Centerstage Family KTV & Resto Bar in Jupiter Place, Makati City, last Thursday, January 28. So, what was up?

They weren't there for interviews, or to gather a scoop, or to network. It was perhaps one of the few nights in a year when all the contributors and staff members of PEP (Philippine Entertainment Portal) came under one roof, just chilling out and enjoying the night away.

For starters, the group did an adaptation of the popular Eat Bulaga! game, "Pinoy Henyo," where Rommel Gonzales and Lito Mañago emerged as victors.

The group's version of "Boat is Sinking," became a test of who would go for whom. The happily chaotic game had everyone in stitches. For a few minutes, the players had to forget the affiliation and designation of the people beside them.

The final contest declared the night's Videoke King or Queen. There were three contenders: Eric Borromeo ("Bawal na Pag-ibig"), Rommel Placente ("I Made It Through The Rain"), and Maricris Nicasio ("Zombie"). Yes, showbiz reporting has its share of good belters (including Rommel Gonzales who chose not to join), but the winner was Eric!

After the singing, the fun was far from over. Longtime PEP Blogger John "Sweet" Lapus made an appearance at 10:00 p.m., and spiced things up with his song and dance numbers—"Let's Get Loud," "Light and Shade," and "Last Dance." He also sponsored the last few rounds of drinks. That's so Sweet!

Of course, in between each activity, food and drinks were aplenty. Plus, the major raffle prizes—courtesy of Cherie Watches, Robinsons Appliances, and Panasonic Lumix—kept everyone excited. Sugi and Cibo restaurants also gave gift certificates .

The party packed up the next day—that is, past one o'clock in the morning!