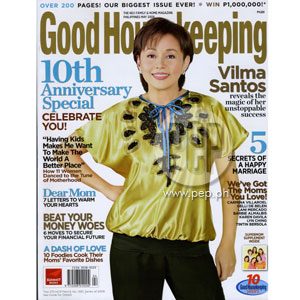 Vilma Santos graces the 10th anniversary issue of Good Housekeeping this May.

Ask any Pinoy or Pinay, young or old, and chances are, they have heard of or seen the one they call Ate Vi. Some know her as a loving wife to former senator Ralph Recto and a doting mom to her sons Luis and Ryan. Others know her as the mayor of Lipa City, Batangas for nine years before being the current governor of the province. But for sure, everyone knows Vilma Santos as an actress with numerous films and awards under her belt as well as legions of devoted fans.

Being the "nanay ng lalawigan" to her Batangueño constituents and a woman worthy of emulation, Vilma shows Good Housekeeping magazine this May how she manages to stay simple. When asked about her relationship with her husband, who is now her senior adviser, she says, "Sometimes we clash, but of course, I still listen to him. Without his help, hindi ako matututo. Everyday is a learning process." When asked for the price she pays for Ralph's tutoring, she quips, "Walang bayad! Kiss lang."

As for her two sons, the fifty-something celebrity boasts just like any ordinary proud mom. "Ryan is a first honor student. Kahit anong pagod ko, I have time for him." With Luis, Vilma admits to be being more of a liberal kind of mother. "'Pag si Luis ang nagkukuwento, I give my comments as a friend."

On being a political figure and public servant, Vilma see it as a challenge and does not take her responsibilities lightly at all. She adds, "Hindi po madali. Kapag ibinigay nila ang tiwala nila sa ‘yo, they expect much from you too. Ang akin lang, ‘pag binibigyan ako ng tiwala, ibinabalik ko ito sa kanila nang buong-buo."

For someone who has been under the stress and strain of the limelight at a very young age (since the 1960s), the Star for all Seasons has never lost her luster. So what's her secret on looking so young?

She divulges, "In a way, the secret is that you're happy—you like what you're doing, you exercise, and eat good food." She even lives by the adage: "Tikman mo lahat, pero ‘wag lang sobra."

Aside from the Star for all Seasons, Good Housekeeping also puts the spotlight on other celebrity moms such as Carmina Villaroel, Gelli de Belen, Lani Mercado. TV hosts Tintin Bersola and Karen Davila are also given space as well as musician Barbie Almabis.

Vilma graces the cover of the 10th anniversary issue of Good Housekeeping magazine this May, now available in all bookstores and magazine stands nationwide at P120 per copy.