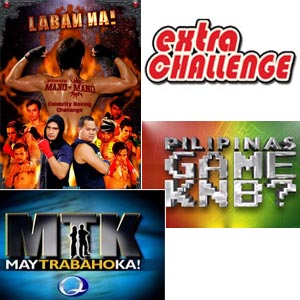 Even before GMA-7 and ABS-CBN bought a franchise of foreign shows—American Idol, Big Brother, Deal or No Deal, Fear Factor, and Survivor—we already had our share to the current trend in television, our very own reality TV shows.

Gone are the days when Pinoy viewers were usually entertained by dance competitions, and singing contests or drama specials on television. Audiences now go for TV programs that show ordinary people or celebrities engaged in different kinds of challenges, performing without any given script in popular programs called "Reality TV."

This program genre started in the U.S. in the 1940s, although it wasn't called reality TV yet. An Internet website mentions Candid Camera, which debuted in 1948, and has since been called "the granddaddy of the reality TV genre." Through a hidden camera, the program caught "unsuspecting ordinary people reacting to pranks." In the ‘50s came several game shows.

Reality television has evolved through the years with other categories, like the face-and-wardrobe makeover and house-renovation shows, even the culinary and fashion-design extreme competitions, which we see today.

But even before American reality shows captured Pinoy audiences, local TV stations already had their own reality programs. These might not be as big and popular as American Idol and Big Brother, but they did build up the local reality-show genre to become a staple in TV viewing today.

PEP (Philippine Entertainment Portal) looks back at these reality shows, particularly those that fall under elimination/game shows. Some shows that are still going strong are mentioned as well. See if you can still remember the old ones.

GAME SHOW. In the early 2000s, local adaptations of Who Wants to be a Millionaire and The Weakest Link were big hits. After dinner, Pinoys would set their place in front of the TV screen and answer the host's questions as if they were one of the studio contestants.

The success of these shows may have inspired the ABS-CBN to create its own game show called Game KNB? Since its first playdate in 2001, this noontime game show and its title have gone through several changes. Kris Aquino first appeared in Game KNB, which was then changed to Milyon, Milyon Na, Game KNB? in 2002. The following year, it became Next Level Na, Game KNB? Now it's Pilipinas, Game KNB? with new host Edu Manzano.

Competing in the early afternoon slot is the newcomer show called Da Big Show, which is hosted by Ogie Alcasid. While Game KNB tests the mental alertness of the contestants, Da Big Show needs participants who are physically fit for their challenges.

In Da Big Show, contestants play traditional Pinoy games with a twist. Four teams compete in a series of games with the objective of being the last team standing. To add excitement to each game, gigantic props are used instead of the usual things needed in traditional games.

FEAR-CENTRIC. Even before Fear Factor was introduced by Endemol in 2001, the Philippines already had shows that challenged contestants mentally and physically. The participants were not first-timers, unlike in Fear Factor. They were called the "King and Queen" of the things they do-eating chilis, putting nails onto the wood using only hands, and even eating blades.

In previous programs of the variety show Eat Bulaga, a segment featured people who had unbelievable skills, like eating the most number of chili peppers, peeling a coconut only by gnawing the husk with one's strong teeth, stopping the blade of a whirring electric fan with the tongue or having a jeepney run over one's stomach. These people became part of the Pinoy Records, which was based on the Guinness Book of World Records.

ABS-CBN also had Pinoy Exposed, hosted by Marc Logan and JV Villar. This show also featured ordinary Pinoys with strange and unusual abilities. This was followed by another program called Kakasa Ka Ba?, hosted by Connie Sison and JV Villar, that challenged ordinary people to do extraordinary stunts and other feats.

And who would forget Extra Challenge (2000)? It was a mix of Survivor, Amazing Race, and Fear Factor, having different sets of challenges for its contestants. There were stunts, time-bound challenges, and even unusual dishes prepared for the challengers, who were mostly celebrities.

Paolo Bediones earned his reputation as a good host through this program. Some believe he deserves to host of the upcoming Survivor Philippines because of his performance in Extra Challenge.

TALENT SEARCH. Talent search programs could be the oldest form of reality TV show in the Philippines. Even before American Idol, local TV networks already created their unique talent-search shows.

In the 80's we had the very popular televised singing contest called Ang Bagong Kampeon, which launched the career of Asia's Songbird Regine Velasquez. With the new millennium, programs similar to Ang Bagong Kampeon searched avidly for Pinoys with a good voice. Some of these were Search for a Star (2003), Search for a Star in a Million (2003), Pinoy Pop Superstar (2004), Popstar Kids (2005), and Little Big Star (2005).

The Philippines, too, has programs that give opportunities to the growing number of job-hunters in the country. However, unlike the earlier mentioned programs, job-search reality shows here cover different types of job for different kinds of applicant.

QTV's May Trabaho Ka (2005), which was recently changed to Hired!, gave hope to job applicants. Hosts Paolo Abrera and Mariz Umali lead applicants through a series of on-the-job challenges given by a potential employer. With the help of a panel of judges, the employer chose the most qualified applicant for the job.

In 2007, RPN franchised the popular America's Next Top Model to do a local version called Philippines Next Top Model (2007), which was hosted by Ruffa Gutierrez. For three months, 14 contestants were given different challenges that tested not only their modeling skills but also their endurance and creativity.

The winner, Grendel Alvarado of Bacolod City, received a modeling representation with Starz People in Hong Kong and a spread in the fashion magazine Preview.

SPORTS. Pinoys are boxing lovers, of course, what with having our very own Pambansang Kamao, Manny Pacquiao. So, it's no surprise that ABS-CBN's creative minds thought of something similar to the U.S.'s The Contender-but with added entertainment. Instead of ordinary Pinoys aspiring to become boxing champs, Pinoy Mano-Mano (2007) invited celebrity boxing enthusiasts to fight each other in the ring. Jordan Herrera won in this first celebrity boxing challenge hosted by Cesar Montano.

CELEBRITIES. Aside from Extra Challenge and Pinoy Mano-Mano, there were other reality TV shows that involved local actors.

Another was ABC-5's Hollywood Dream in 2005. Fifteen amateur and professional actors—including Julia Clarete (winner), Raymond Bagatsing (runner-up), Pinky Amador, Roxanne Barcelo, Rafael Rosell, and Jamie Wilson—were chosen as the contestants who tried to prove they could break into Hollywood.

These are just some of the reality TV shows created by Pinoys. Aren't they the same as the foreign shows that "invaded" the Philippines?

Yes and no. With inevitable changes in the viewing habits of TV audiences, surely more reality shows, franchised or original Pinoy, will spring up. Who knows, other programming genres may even be in store for entertainment-hungry viewers.
Read Next
Read More Stories About
Survivor, Pinoy Idol, starstruck, Star Circle Quest, Star in a Million, looking back
Post a Comment
Featured
Latest Stories
Trending in Summit Media Network